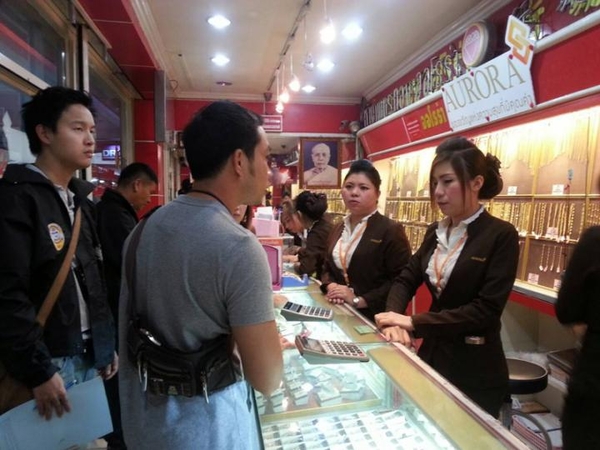 A lone gunman robbed a branch of Aurora Gold and Jewellery shop inside a shopping mall in Bangkok’s Bang Plad district Thursday night, making off with Bt4.06 million worth of gold ornaments.

The Bang Plad police station was alerted of the robbery inside the Tang Hua Seng Thon Buri shopping mall at 8.20 pm.

Two female staff members were in the shop on the ground floor of the mall when the man walked in and asked to see three gold necklaces before pulling out a 9mm pistol and forcing the women to fill his white cloth bag with gold ornaments.

Footage from security cameras in the mall show the man walking fast and exiting the mall through a gate at the side then fleeing on a motorcycle.

The staff told police that the man appeared to be around 50 years old and was about 1.60 metres tall. Security cameras in the shop clearly show his face.

The staff told police that they remember seeing the man in the shop last month but not buying anything.

Police later brought in staff member, Mali Munjit, 25, for questioning where she was held for two hours.