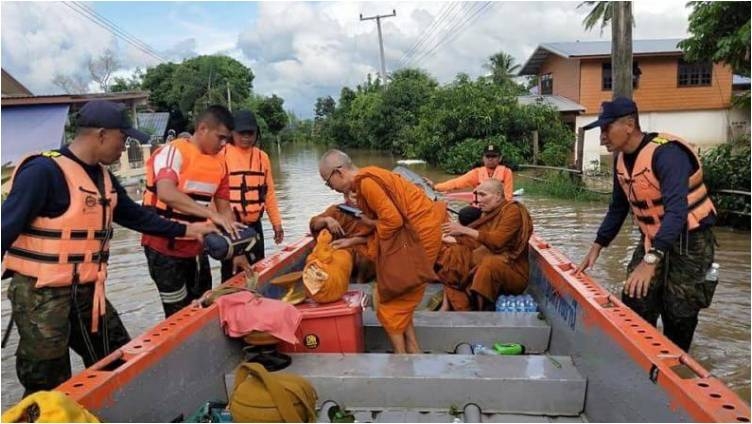 Ten provinces remained flooded on Friday due to the continuing effects of tropical storms Podul and Kajiki in upper Thailand and the seasonal southwest monsoon in the South.

The influence of the three events caused flooding in 32 provinces between August 26 and September 6, resulting in 19 deaths and 158,028 households affected, Disaster Prevention and Mitigation Department chief Chayaphol Thitisak reported on Friday.

The 19 deaths were reported across Amnat Charoen (4), Roi Et (4), Khon Kaen (3), Yasothon (3), Phichit (2), Ubon Ratchathani (1), Phitsanulok (1) and Mukdahan (1), while two persons were missing in Amnat Charoen and Phichit, and another injured in Chaiyaphum, he said. A total of 3,438 residents were evacuated from flood-risk locations, he added.

As parts of the country – especially the Northeast and the East – were on Friday still suffering heavy rains that pose the risk of flash floods, forest runoffs and landslides, department officials will continue to closely monitor the situation and prepare to provide timely aid to affected residents, Chayaphol said.

He urged people to follow weather reports closely and to call for help to the department's hotline 1784 around the clock.