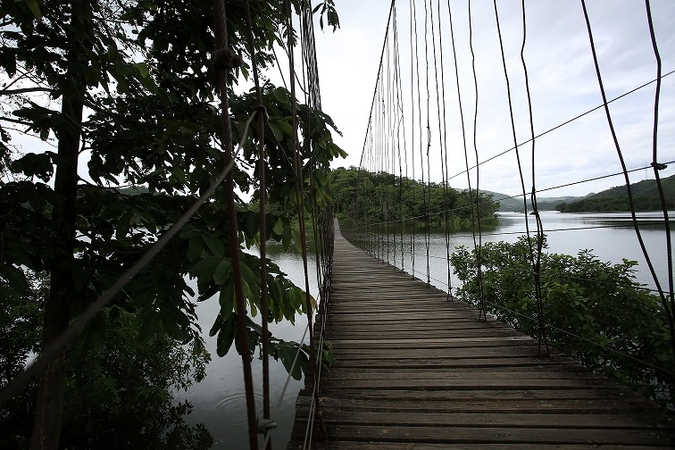 The suspended bridge at the Kaeng Krachan Dam where an oil drum was found containing the skeletal remains of “Billy” Rakchongcharoen.

The Department of Special Investigation (DSI) is continuing to gather evidence linked to the abduction and murder of Karen activist Polajee “Billy” Rakchongcharoen, its chief, Pol Colonel Paisit Wongmuang, affirmed on Friday.

Bones, found in a 200-litre oil drum that had been dumped near a bridge to the Kaeng Krachan Dam, were identified this week as those of the long-missing social activist.

Paisit was responding to a reporter’s question about park officials claiming to have never seen any DSI officials at the park.He urged anyone with information about the case to call the DSI hotline at 1202, vowing that their identity would be kept confidential.

Paisit was also asked about a comment by Chaiwat Limlikhitaksorn, director of Protected Area Regional Office 9, who said the location where the oil drum was found was not closed off but rather accessible to anyone. Chaiwat felt the DSI had tarnished his agency’s image in the way it was presenting information to the media.

Paisit refused to argue the matter, saying only that the DSI was proceeding on the basis of a “substantial” amount of evidence and instructions from the prime minister and justice minister to be straightforward, quick and fair in its investigation.

The investigation is expected to take three months, Paisit said, and with the evidence not yet complete, no charges or arrests are pending.

Billy was last seen in the park on April 17, 2014, when he was apprehended by Chaiwat, the park’s superintendent at the time, and four other officials for allegedly collecting wild-bee honey illegally.

Park officials have consistently denied detaining Billy, who had been actively encouraging ethnic Karen living in the park to file formal complaints over alleged abuses by officials.

The park officials insist Billy was merely questioned briefly and then released without charge.