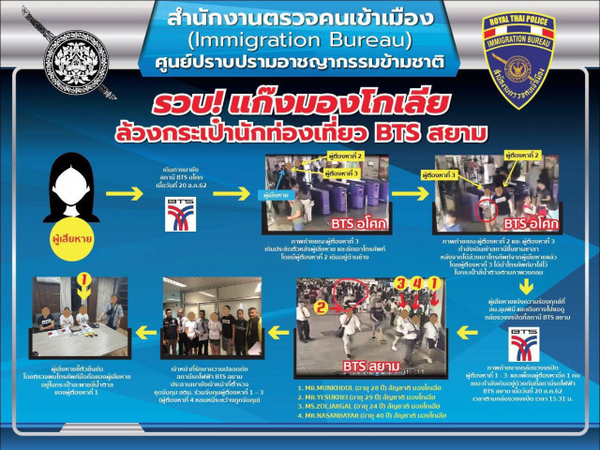 Immigration police arrested 3 Mongolian gangsters for pickpocketing tourists and Thais at BTS Siam Station and discovered a mobile phone and 13 other items in their possession. They live in the same place and entered the country at the same time.

Police Lieutenant General Somphong Chingdao, the commander of the Immigration Bureau, announced the arrest of the three Mongolians, namely Munkhdul, 28, Yesukhei, 29, and Zojargal, 24, on charges of theft and having in their possession one iPhone, BTS Skytrain tickets, plane tickets, and 13 shoulder bags. The three were arrested at the Siam BTS station.

All three were found guilty of being foreign gangsters, stealing from Thais and foreign tourists in tourist areas and at BTS stations.

Another suspect, Nasanbayar, 40, escaped arrest. He travelled to Thailand on the same flight, resided in the same place but left his accommodation together on August 20 at 12.11pm. He is also accused of working Siam BTS station.