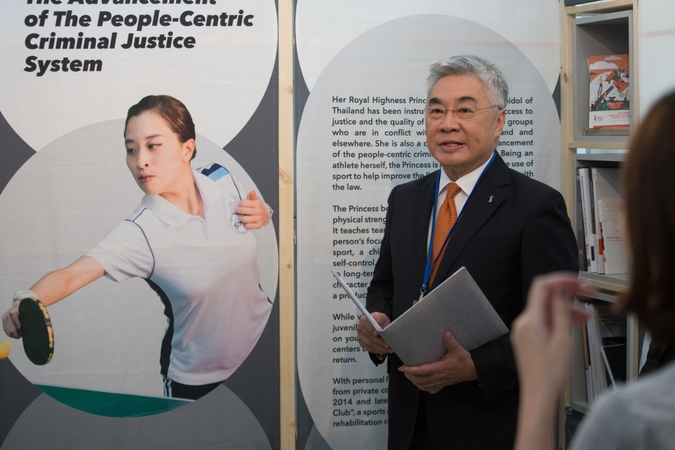 Despite efforts to curb crime among young people, the worldwide rate of juvenile delinquency is on the rise.

Most experts believe that the traditional method of punitive justice no longer applies and that rehabilitation and reintegration are the way forward. Of prime important is the strategy of youth crime prevention through sports.

At the 28th Commission on Crime Prevention and Criminal Justice (CCPCJ) held in Vienna, Austria between May 20 and 24, the Thailand Institute of Justice (TIJ) in partnership with the Thai government proposed the draft resolution, “Integrating Sport into Youth Crime Prevention and Criminal Justice Strategies”. This supports the concept of using sport as a tool to reduce and prevent at-risk and ex-delinquent groups from taking the wrong path and empowers them to reintegrate into society.

TIJ has hosted many activities in 2019 as part of the “Collaborative and Innovative Justice for All: Toward the 2030 Agenda”, aligning the issues of criminal justice system with the Sustainable Development Goals to circulate and exchange ideas and experiences among experts, activists, academics and policy-makers on the theme “justice is everyone’s concern”.

In the side event “Integrating Sport in Youth Crime Prevention and Criminal Justice Strategies”, TIJ joined forces with the United Nations Office on Drugs and Crimes (UNODC), the governments of Columbia, United Kingdom and Thailand and Bounce Be Good (BBG) Thailand, a youth sports centre under the Royal Patronage of Princess Bajrakitiyabha Narendira Debyavati. The event generated discussions on crime prevention for at-risk youths and former offenders.

“Sports are a particularly effective means of addressing vulnerabilities and reducing opportunities for individuals’ involvement in violence,” said Miwa Kato, Director of Operations, UNODC in the opening remarks and added that UNODC has been employing sports as a crime prevention method for youths as part of the Doha Agreement.

Morakot Sriswasdi, ambassador, Permanent Representative of Thailand to UN Vienna who also joined in the event highlighted the contribution of sport to youth crime prevention.

“Sports-based learning programmes can be a great tool to boost life skills such as problem solving, relationship skills, self-awareness, and empathy among children and young people. The BBG not only brings out the potential and passion for sports among underprivileged children and youth who had chosen the wrong path but also offers sports as the new dimension of crime prevention and youth empowerment,” she said.

Prof Kittipong Kittayarak, TIJ’s Executive Director said in his closing remarks: “Sport can be a window of opportunity for all of us to rethink about crime prevention and criminal justice to better address the needs and development of our children and youth. Let sport be the united force for us to give those who have chosen the wrong path to re-play, rethink, rehabilitate, reintegrate, and eventually, re-live their lives.”

TIJ also hosted the exhibition “Investing in the Future: Revitalizing and Empowering Youth” to illustrate the benefits of integrating sport in youth crime prevention in support of the draft resolution. The resolution was adopted by the UN Commission on Narcotic Drugs and Commission on Crime Prevention and Criminal Justice with countries endorsing the draft resolution including Andorra, Myanmar, the Philippines, Belarus, Bulgaria, Peru, Australia, the United States, Nigeria, Indonesia, Italy, Japan, Qatar, Norway and Panama.

The successful mission on a global stage like the CCPCJ is an important step forward towards creating the rule of law and sustainable development, along with the previous successful mission “Rehabilitation and Social Reintegration of Female Prisoners,” also endorsed by HRH Princess Bajrakitiyabha.

The draft resolution will next be reviewed the United Nations Economic and Social Council (ECOSOC) and will be on the agenda of the United Nations General Assembly in January 2020. Once approved, the proposal will become the international benchmark for youth crime prevention.

Other side-events in which TIJ participated included “Fostering a Culture of Lawfulness in Support of the 2030 Agenda”. It also joined with Penal Reform International to host two side-events: “Global Prison Trend 2019,” which introduced the report on the “Global Prison Trend 2019”; and “Rehabilitation and Social Reintegration of Female Prisoners” which saw the launch of the handbook, “Guide to the Rehabilitation and Social Reintegration of Women Prisoners: Implementation of the Bangkok Rules.”

TIJ also hosted the side-event “Redesigning a Borderless Youth Engagement for Sustainability: A Showcase of Outcomes from the UNODC-TIJ Borderless Youth Forum on Innovation, As a member of the Institutes of the UN Crime Prevention and Criminal Justice Programme Network (PNI), TIJ participated in the session Programme Network Institutes (PNI) Workshop.