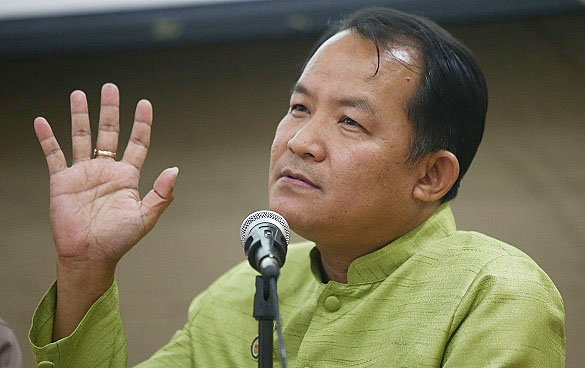 Social activist and lawyer Srisuwan Janya on Monday (September 9) led 20 representatives of Bangkok residents, whose homes allegedly sustained cracks from tremors caused by the construction of nine condominiums, to file a lawsuit against city officials for negligence, abuse of power and violation of rights.

The lawsuit was filed at the Central Administrative Court against the officials regarding the construction projects in Sukhumvit Sois 101 and 103 (Udomsuk).

Srisuwan said this case could be among the first to use the court’s newly launched settlement system, which may see both parties settling the dispute before it is taken to court.

The lawsuit, filed with the court’s Environment Case Division, is against the director of the Bang Na District Office, the director of Bangkok Metropolitan Administration (BMA)’s Department of Public Works, BMA governor and the Office of Natural Resources and Environmental Policy and Planning (ONEP)’s committee on Environmental Impact Assessment report (EIA).

The 34 affected residents are demanding that the project’s construction permit and EIA report be revoked and that they be paid a total of Bt5.55 million in compensation plus 7.5 interest per year until payment is completed.

Sutthipong Wisawawirun, one of the affected residents, said his two townhouses covering a combined 60 square metres and located just 6 metres from one of the construction sites were severely damaged due to the construction, which often lasted until 2am daily and even took place on Sundays and public holidays.

He added that though the project owners had spoken to the residents about the problems, they then began stalling when it came to paying up. He said the construction firm had initially offered to pay him Bt21,000 in compensation, while an insurance company offered to pay Bt70,000.

However, he said, the compensation offered was not enough and that he and other homeowners in the area want their homes to be restored to their original state. Though the construction has been going on since May 2018, nothing has been done to help the affected residents, Sutthipong added.

Other than the lawsuit at the Central Administrative Court, the residents have also filed civil lawsuits with the Phra Khanong Provincial Court. He said the plaintiffs were divided into two groups, with the first group of 20 residents sitting down for settlement negotiations on November 26 and the remainder on June 8, 2020.