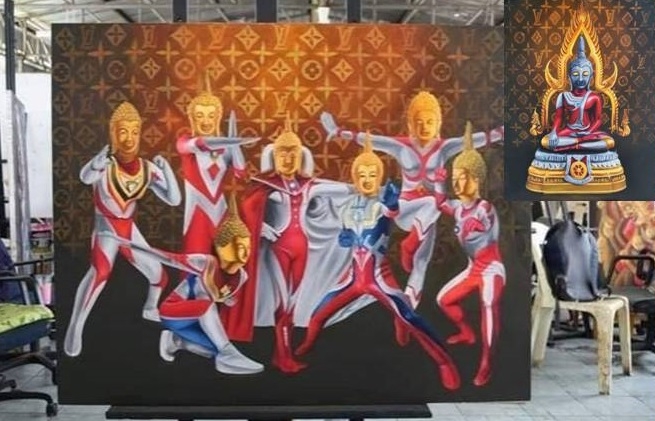 The group “Chao Phut Phalang Phaendin” (Buddhists who are the power of the land) on Wednesday (September 11) filed a police complaint against a fourth-year university student for depicting Buddha as an Ultraman superhero in four paintings that were on display at a Nakhon Ratchasima shopping mall early this month.

The group, led by Jaroon Wannakasinanon and lawyer Pongnarin Amornrattana, filed the complaint with the Crime Suppression Division in Bangkok and also demanded that national artist Chalermchai Kositpipat and well-known lawyer Decha Kittiwithiyanan be arrested for publicly supporting the student. They also wanted the girl's teacher as well as Terminal 21 Korat mall executive Papichaya Na Nakhonphanom, who organised the exhibition, be heald for the charge. The group wants the five people charged for allegedly violating the Penal Code’s Article 206 (anything done to an object or place of worship of any group of persons in a manner that is likely to insult them).

Deputy inspector Pol Captain Jiraporn Wantho accepted the complaint and said she will present it to her superiors for further consideration.

Jaroon claimed the paintings depicting Buddha as a superhero insulted national heritage and feelings of Buddhists. Thailand has millions of foreign visitors every year, and they could perceive the religion in a negative light due to these paintings, he said.

He also said that national artist Chalermchai and lawyer Decha’s comments saying the paintings were just an artistic expression can be regarded as promoting such wrongdoing. He also said there is no way the student could have done this on her own, as it requires a lot of money to get the paintings displayed in a shopping mall.

Though the Nakhon Ratchasima Rajabhat University (NRRU) student had apologised, Jaroon said it was too late because the “misdeed” has been done. The student, who said her aim was to depict Buddha as a superhero who can save mankind and bring peace to the world, had on September 7 tearfully apologised to Buddhist monks at a Nakhon Ratchasima temple.

Meanwhile, Phra Payom Kalayano, abbot of Wat Suan Kaew in Nonthaburi province, said these paintings did not destroy Buddhism as claimed and called on all sides to forgive the young artist. He said he believed that the student did not mean to disrespect Buddha, but just wanted to depict Buddha using pop-culture images that she is familiar with.

"The paintings wouldn’t have caused such a stir if they were only displayed at the university's studio, but because they came out in public, this issue has come up,” the abbot said, adding that there were many times the image of Buddha was depicted in different ways, like with red lips or sunglasses, and nothing has been done. Hence, he said, the student should be warned. “There’s no need for her to get arrested. She has already apologised publicly. Society should be more forgiving,” he said, adding that young people should think and do things in moderation.

Meanwhile, a Bangkok resident, going by the name “Pakorn Pornchiwangkul” on Facebook, has put the Buddha-Ultraman painting that he bought at the exhibition on auction online, and as of Wednesday afternoon, he had received bids for as much as Bt500,000.

Vowing not to destroy the painting as some people have suggested, the man said he will spend 90 per cent of the money earned from the auction on buying beds for a Nakhon Ratchasima hospital and will give the remainder to the student in question.

Samart Jabjone, NRRU’s assistant rector for public relations, meanwhile, said he was worried about the student and called on people to forgive her because she had no ill intention, and only expressed herself in a way that can be considered inappropriate. He added that she has apologised and there is no reason to go after her with legal action.