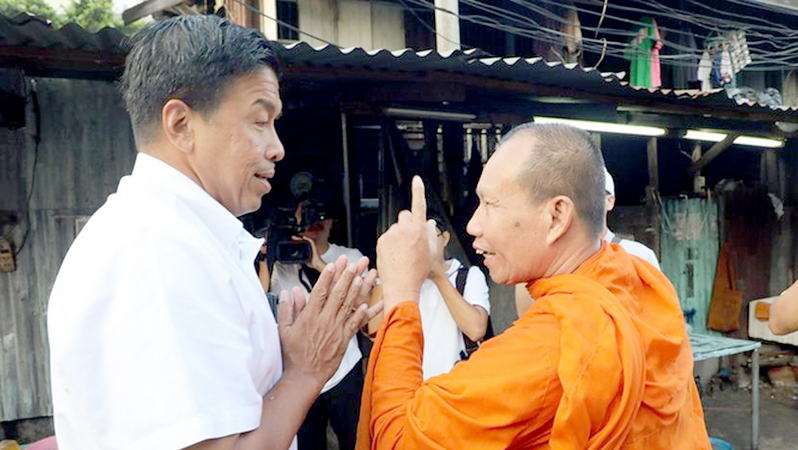 Chatchart speaks with a monk during a political campaign in March this year.

Pheu Thai Party executive Chatchart Sittiphan has reportedly indicated that he will run as an independent candidate in the next Bangkok gubernatorial election,

Chatchart Sittiphan, a Pheu Thai Party executive and former transport minister, has reportedly indicated that he will run as an independent candidate in the Bangkok gubernatorial election, fellow party member Wattanarak Amnacsoradej said on Monday (September 16).

However, no official statements have come from either Chatchart or the Opposition leading party.

Chatchart served as transport minister under the Yingluck Shinawatra government and was also an assistant dean of Chulalongkorn University.

Wattanarak ran as a candidate for a Bangkok MP seat under Pheu Thai’s banner and is also a member of the independent “For a Better Bangkok” group. He said his group has agreed that Chatchart should run as an independent candidate in the next Bangkok gubernatorial elections.

Meanwhile, incumbent Bangkok Governor Aswin Kwanmuang’s term began on October 18, 2016, after he was appointed by the junta government to replace elected Sukhumband Paribatra.

A Bangkok governor’s term usually lasts for four years, but there have been no indications from the government as to when the next gubernatorial election will be held or when Aswin’s term will end.