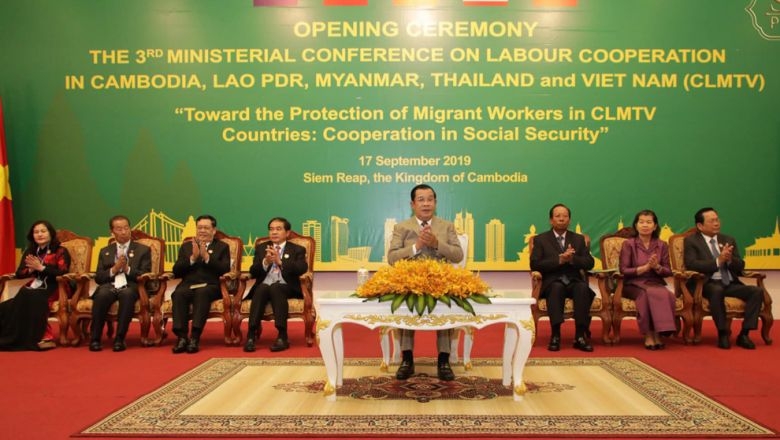 The joint framework aims to ensure that migrant workers will receive social security benefits upon their return home or when changing workplaces within CLMTV countries, Hun Sen said.

“We need to find a way to integrate and continue the so-called social security regime in the country. It’s called portability of the National Social Security Fund (NSSF).

“When the time comes for people to retire, they can receive pensions, but this is only for domestic workers. We also need to think of those who are working abroad.

“The transfer of benefits and the raising of resources is a challenge, but if we are able to do so then the [shared vision] of Asean as a community with a common destiny that benefits residents [will be realised],” the prime minister said.

He said the five CLMTV countries would extend discussions to the Asean bloc in order to extend social security benefits to additional migrant workers in the region.

Hun Sen said he was already negotiating an agreement to transfer social protection benefits to Cambodian migrant workers in Thailand.

According to official figures released by Thailand’s Office of Foreign Workers Administration at the Ministry of Labour’s Department of Employment, there were 312,206 documented Cambodian workers in Thailand in February.

Centre for Alliance of Labour and Human Rights programme coordinator Khun Tharo told The Post that implementation of the framework could be problematic because each CLMTV country institutes different mechanisms.

“We must study which social protection mechanisms are a priority in different countries.

“For example in Thailand . . . migrant workers are obliged to register and make payments towards the Thai social protection system in order to be fully registered.

“Thailand’s management is systematically correct but how about Cambodia?” he said.

Tharo added that it was inevitable that there would be an agreement or legal framework between countries to ensure the reintegration of workers into their home countries after their contracts have expired.

During their period of employment, he said, workers should be recorded systematically. Once they have finished their employment in the recipient country, they must be guaranteed to receive benefits on their return home.

Sam Heng told U Thein Swe that more than 1,300 Myanmar workers had been licensed as foreign workers in Cambodia, some 180 had become members of the National Social Security Fund, and he expected this number to increase.

According to another ministry Facebook post, Sam Heng also met with Thailand’s Labour Minister Chatumongol Sonakul, who agreed to set up additional mechanisms that will not require workers to keep returning home to renew work permits.

At the meeting, the two sides vowed to strengthen cooperation on what has been agreed and try to resolve all issues in order to improve the wellbeing of both countries’ workers, especially in the fisheries sector.

The two parties discussed the signing last Thursday of a memorandum of understanding (MoU) on labour cooperation and vowed to effectively implement the MoU and cooperate on other matters.

“His Excellency Khampheng Saysompheng also expressed his intention to invite Minister of Labour and Vocational Training to visit Laos in November,” another ministry post said.