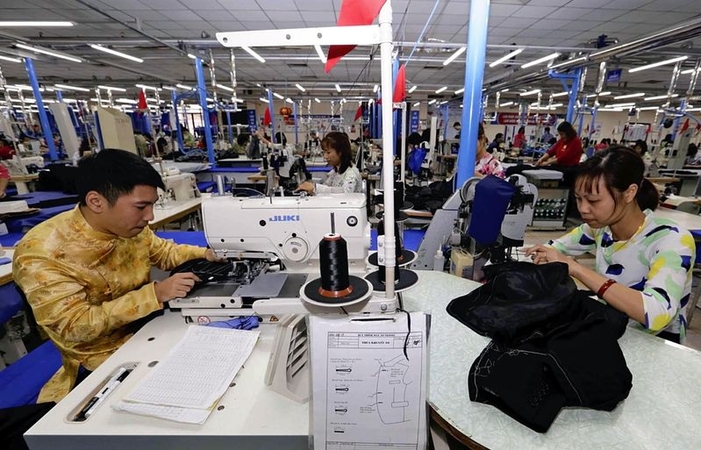 A sewing factory in Vietnam (Courtesy of Vietnam News Agency)

BANGKOK/HANOI — Southeast Asian countries are intensifying their efforts to attract companies planning to move production bases outside China, as the United States and China have become entrenched in tit-for-tat sanctions and retaliatory tariffs. To attract the needed outside investment, they are offering tax incentives and other benefits.

“We see the U.S.-China trade frictions as an opportunity to expand our efforts to attract foreign companies,” Thai Deputy Prime Minister Somkid Jatusripitak told reporters after a Cabinet meeting on Sept. 10.

On that day, the Thai government adopted what it calls the “Thailand Plus” package of preferential measures for companies that relocate factories and other facilities from China. A corporate tax deduction of up to 50 percent is one of the main pillars of the package.

The Cabinet also created an investment management council headed by Thai Prime Minister Prayuth Chan-o-cha to tackle deregulation. The council will have a special team to assist companies moving to Thailand in the necessary procedures.

In a statement released Sept. 11, Philippine Trade and Industry Secretary Ramon Lopez said the trade friction is “an opportunity for the Philippines to attract more export-oriented manufacturing foreign direct investments.”

Lopez also said his department would work with the National Economic and Development Authority on matters such as relaxing rules on foreign investment.

Cambodia, with its cheap labor, is increasing its presence as an alternative production base to China for apparel and other products.

This has led to increased exports to the United States, which exceeded $2.2 billion in January-June, nearly 30 percent higher than the same period the previous year. As one of the least developed countries, Cambodia has an advantage of low tariffs when exporting to the United States and Japan.

According to the United States Fashion Industry Association, about half of its member companies are considering expanding procurement in Cambodia in the next two years.

Garment Manufacturers Association in Cambodia Deputy Secretary General Kaing Monika said there is a clear flow of production transfers and that makers there want to capture that demand by making progress on capital investments and worker training.

In Myanmar, more companies that operate in China have been visiting a special economic zone supported by Japan.

Myanmar State Counsellor Aung San Suu Kyi in August attended an investment forum cosponsored by Japan and the United States, saying that Myanmar wants to further relax regulations to attract companies that can become partners in its economic development.

In fact, moves toward transferring production from China to Southeast Asia are spreading.

A Thai local newspaper reported that about 10 companies are planning to move factories to Thailand. These include Delta Electronics Inc. and Merry Electronics Co. of Taiwan, and Ricoh Co. and Sharp Corp. of Japan. More than 30 companies, including a major U.S. tire manufacturer, are considering moving to Southeast Asia.

Every country wants to further accelerate these relocations to ease concerns about economic growth.

Of the six main nations of the Association of Southeast Asian Nations, five reported slower growth in gross domestic product from April to June due to China’s economic slowdown, which has been attributed to the ongoing trade friction. The exception was Malaysia, which has strong domestic demand.

Southeast Asian nations hope that more production bases will mean more exports to developed countries, which will make up for sluggish exports to China.