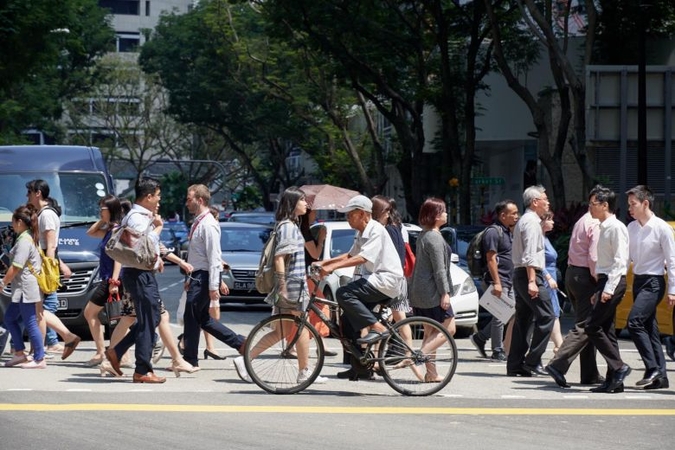 While Singapore ranked the highest out of the four Asian nations included in the index, it still placed in the bottom half of the list at No. 13.PHOTO: ST FILE

SINGAPORE - Of the 20 major economies worldwide, Asian countries are among the least prepared to combat the threats of societal ageing and workplace automation. This is according to a new study from Mercer and Marsh & McLennan Insights, released on Wednesday (Sept 18).

While Singapore ranked the highest out of the four Asian nations included in the index, it still placed in the bottom half of the list at No. 13.

The Ageing and Automation Resilience Index analyses the mitigating factors a country has in place to tackle the challenges of ageing and job automation among elderly workers, as well as the strength of their local retirement system, to assess a country's preparedness to manage ageing and automation.

Denmark came up tops, with Australia and Sweden among the the most resilient countries to ageing and automation challenges.

Among other things, the report found that difference in the average risk of automation between old and young workers is the largest in Singapore, indicating the "acute vulnerability of older workers to automation".

This suggests high resilience by Singapore despite older workers having a disproportionately higher risk of automation as compared with younger workers, the report highlighted.

According to Mercer, 35 per cent of the working-age population in Singapore will be above the age of 50 by 2030.

"Globally, governments and organisations are experiencing a time of significant disruption. Technological advancements are increasingly putting low-skilled routine jobs at risk of automation - jobs that older workers aged 50 and over are often employed in. At the same time, populations around the world are ageing, with elderly populations growing and working-age populations shrinking," the report said.

Ms Peta Latimer, Mercer CEO for Singapore, noted that this could represent an opportunity for firms to capitalise on a new source of labour.

"As semi-retirement and re-retirement becomes normalised, employers should take this opportunity to tap an experienced, eager and productive pool of talent. Inclusive employment requires new ideas for designing work, changing the make-up of the traditional full-time workforce, and rethinking the role of managers," said Ms Latimer.

She added that some measures could include freelance and flexible approaches to working.

"In this way, older workers can become part of a shared 'pool' of resources that specialise in certain skills and provide the decades of experience that can be accessed by other organisations," she said.

Mercer's CEO for Asia, Ms Renee McGowan, added that individuals as well as government and corporate structures in Asia have a shared responsibility towards being more prepared for the rapid societal ageing and technological advancements, that are particularly apparent within Asia.

"We are fast approaching the most significant generational tipping point in history," said Ms McGowan. She said that by 2030, Japan will become the world's first "ultra-aged" economy, with those aged 65 and over accounting for more than 28 per cent of the population, while Hong Kong, South Korea and Taiwan's elderly cohort will make up more than one in four people.

"But older workers are, now more than ever, faced with the risk of losing their jobs to automation, endangering their ability to finance their longevity. Businesses need to better leverage their experienced workforce, with people more willing and able to work past the age of 65," Ms McGowan added.

To this end, Mercer noted that businesses can help employees better prepare for the transition towards an ageing workforce.

This may be achieved by creating career path assessments around their employees' financial decision making, physical health and future career opportunities, as well as targeted skills-gap training, regardless of age, Mercer said.