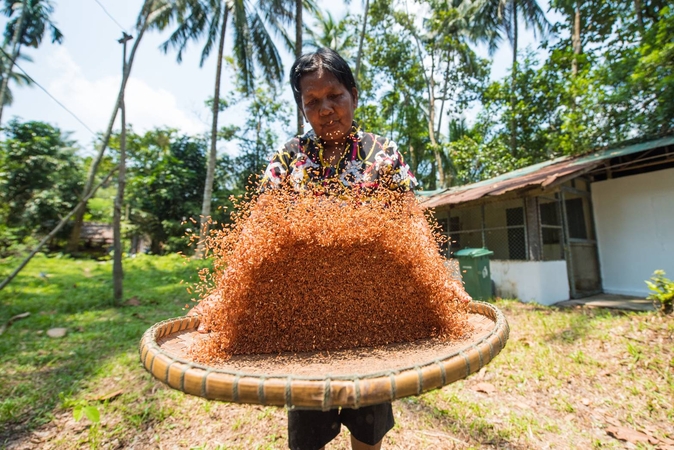 By Jintana Panyaarvudh
Special to The Nation
Tak Bai, Narathiwat

A unique way of rice farming that was once the norm in Narathiwat’s Tak Bai district but has now almost disappeared, is getting a new lease of life thanks to a tour that connects to the old traditions of the area to neighbouring  Kelantan, just over the border in Malaysia.

The initiative has grown out of community-based tourism research conducted by residents of Tak Bai that aims to showcase their agricultural lifestyles to promote tourism and peace in the restive south.

Prajak Thepkhun, the chairman of community-based tourism at Wat Chonlathara Singhe in Tak Bai, who heads the research team, says the study aimed to enhance the value of rice and its farmers in Tak Bai as well as promote tourism in the deep South's “red zone”, an area long troubled by some of the most intense separatist violence.

Funded by Thailand Science Research and Innovation, the researchers chose Tak Bai as the study area because in the past farmers there struggled with acid soil and thus produced less rice than their neighbours.

That situation was remedied back in 1984, when His Majesty the late King Rama IX introduced the “Klaeng Din” initiative, a form of soil aggravation, enabling the growers to increase their yields to 450-500 kilograms per rai from the 50-100 kgs of yesteryear.

Photo by Parinya Chawsamun: A tourist tries to pound half-milled rice at a rice mill in Ban Khok It- Khok Nai in Phron sub-district.

And the area is also known for its “Hom Kradang Nga”, a seed that flourishes in the district and which produces soft, fragrant and highly nutritional rice, Prajak explains.

Unlike other parts of Thailand, rice farmers in Tak Bai plant rice once a year so as to consume less water. They also harvest their crop in a different way, using a device called a “Krae” to cut the ears of rice that allows them to store the rice in their barns for as long as 10 years.

The researchers also wanted to trace the relationship between the Tak Bai people and Siamese-Malaysians or Malaysians of Thai heritage by using rice farming as their link.

“If we find some connection or similarity, we would be able to further develop a tour route connecting Tak Bai to Kelantan, an hour’s drive from the Thailand border,” said Prajak.

Currently, there are around 8,000 Siamese-Malaysians living in Kelantan’s Tumpat district, home to thousands of rai of rice paddy fields.

However, the farming lifestyles of these Siamese-Malaysians has changed, with most of them either renting their land to Chinese settlers to farm or selling the fields to property developers, says Chuan Kanitsorn, deputy chairman of Kelantan-Siamese Association.

They still eat rice but instead of growing it they buy it from Thailand.

Back in Thailand, locals worry that the disappearance of traditional rice farming practices could also happen in Tak Bai.

“We are afraid that the traditional rice farming will vanish in the next decade because the young generation tends to leave their hometown for work in the city,” laments Mong Thongkhruea, the head of the Housewife Agriculturist Group of Ban Khok It-Khok Nai in Phron sub-district.

She hopes that its inclusion in the research and route tour will ensure the tradition is preserved for the next generation and that tourists will come to see it.

Mong, who is member of the research team, adds that she jumped at the chance to join as more tourists will generate income for local people.

The researchers are planning plenty of activities to attract visitors including participating in planting the seeds, observing the rites performed both before and after harvesting, learning how to grind semi-milled rice and processing the rice into “lasae”, as the rice noodles peculiar to the people of the restive south are known.

The Buddhist temple played an important role in the division of land between Siam and Malaya (then a colony of the United Kingdom) during the reign of King Rama V in 1909.

When the temple was founded in 1873, Tak Bai was still a part of Kelantan in Malaya. Thailand argued because the temple was Buddhist, the area should remain part of Thailand.

The British relented and agreed to use the Kolok River, which flows through Tak Bai, as the boundary and so the temple became known as Wat Phithak Phaen Din Thai, the temple that protects Thai sovereignty.