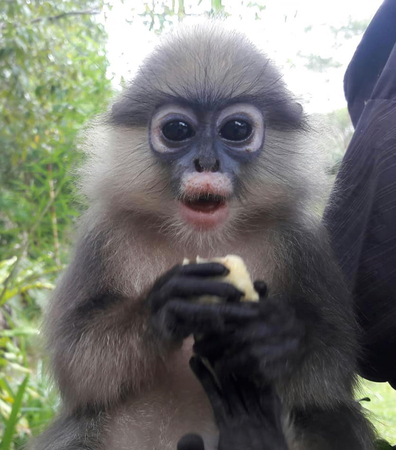 A baby spectacled langur was handed over to national park officials Saturday morning after a villager rescued it from dogs in Krabi’s Koh Lanta district.

Suwat Suksiri, chief of the Thung Thalay Wildlife Sanctuary, came to pick up the baby from Anat Onnual, 31, a resident of Ban Khun Samut village in Tambon Koh Klang on the island.

On Friday, Anat found the baby langur abandoned by its mother inside his rubber plantation so he took it home and informed the wildlife sanctuary. Anat said the mother and her baby came out from a nearby forest to look for food in the rubber plantation but the mother was frightened by dogs and fled back into the forest, leaving the baby behind.

Suwat said the spectacled langur is a protected species under the CITES (the Convention on International Trade in Endangered Species of Wild Fauna and Flora) treaty. The baby will be nurtured at the Krabi wildlife nature centre pending release into the wild.