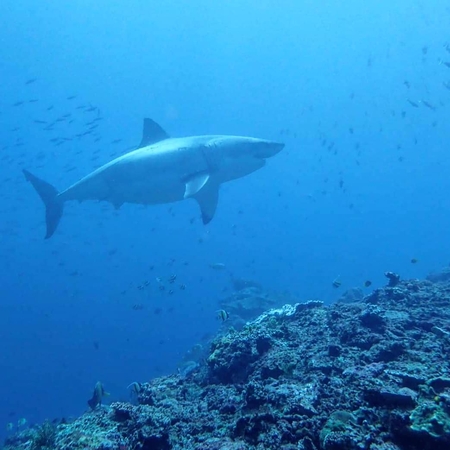 Thai marine biologist Thon Thamrongnawasawat has posted a photo of a great white shark, claiming his friends had spotted it in waters off Bali on Friday (September 20) while diving at Crystal Bay Divesite.

According to Cholladda Khalythong and Sasi Chaoniyom, the intention of two Thai divers who visited Klungkung, the smallest regency on Bali, was to see sunfish or molamola at Crystal Bay. “We dived for 20 minutes and did not see any sunfish, until a giant shadow drew close,” Cholladda said. “At first, the dive leader thought it was a whale shark, but when it swam closer it turned out to be a great white shark, so we snapped this photo.”

According to Chollada, the shark is around 4-5 metres long and can be seen only at a depth of 23 metres.

Thon said that great white sharks are a rare marine animal that only appear in cold water, so its appearance in Bali is a huge surprise for divers and marine biologists worldwide. “It’s rare but not entirely impossible to see a great white shark in Bali, since parts of the Indonesian waters sometimes have a cold stream from the ocean’s depth,” he said. “However, it’s highly unlikely that we would find such animal in Thai waters, since our seas are mostly warm and shallow.”