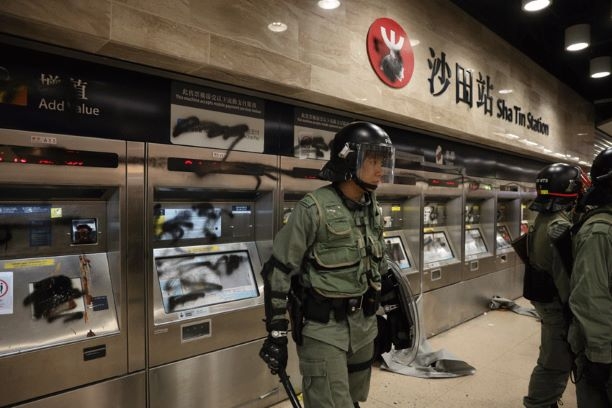 HONG KONG – Violence and vandalism continued to plague the city as riotous mobs vandalized Sha Tin subway station and set a fire across a wide street on Sunday, the 16th straight weekend of protests sparked by the now-withdrawn extradition bill.

Police stormed the New Town Plaza shopping mall in the New Territories town after the violent protesters went on rampage, started fire and desecrated the Chinese national flag. Earlier, hundreds of protesters, young and old, gathered in the mall.

Police launched a dispersal operation after “radical protestors gathered on the roads in the vicinity of Mong Kok Police Station, throwing bricks at the police station and aiming laser beams at police officers at scene”.

Hours into the suspension due to violence and vandalism by riotous mobs, Sha Tin Police Station Report Room service has resumed normal.

A group of protesters gathered at Metroplaza mall near Kwai Fong station. A group of riot police officers are also seen.

On a footbridge in Kwai Fong where the action is now centred, a protester has smashed a surveillance camera with an umbrella, while another device has been taped up with sanitary pads.

After police fired tear gas, protesters were dispersed and left the area.

The MTR Corporation says trains of the Tung Chung line will not stop at the Kowloon station due to an emergency situation, and the station has been closed.

Radical protestors set barricades and started fires at Yuen Wo Road in Sha Tin, sending panic to people and seriously affecting traffic nearby, police said in a statement.

Police is using appropriate force to conduct a dispersal operation, and warn all protestors to stop illegal acts and leave immediately, the statement says.

Some radical protestors are recklessly damaging the facilities with hard objects, spraying water on the floor and throwing objects at Sha Tin MTR Station, according to police.

“In view of the current situation, the report room services of Sha Tin Police Station are now temporarily suspended,” a police statement said, asking city dwellers to call 999 in case of emergency.

Because of an incident, Tsing Yi Station is closed; Tung Chung Line trains will not stop at Tsing Yi station, says MTR.

Sha Tin Station is closed due to facilities being vandalized at the station, MTR Corporation said. East Rail Line trains will not stop at Sha Tin Station, it added.

Black-clad vandals flooded the shopping mall lobby to obstruct police force from performing duties after going on a rampage, desecrating the Chinese national flag and vandalizing facilities at a nearby MTR station.

Prior, they lined up in pairs to tread on the national flag in New Town Plaza, smeared it and dumped a trashcan containing it into a river. They also smashed surveillance cameras and metro tickets vending machines at Sha Tin MTR station, which was forced to shut down.

In view of possible vandalism, security has been beefed up at Airport Express Hong Kong Station. Riot police were seen patrolling.

The MTR Corporation has adjusted Airport Express service until further notice as requested by the Hong Kong government and Airport Authority to facilitate the access control arrangements at the airport. As per the change:

- Airport Express is running between Airport and Hong Kong stations only, at 10-minute intervals

- Trains will not stop at Kowloon, Tsing Yi and AsiaWorld-Expo stations