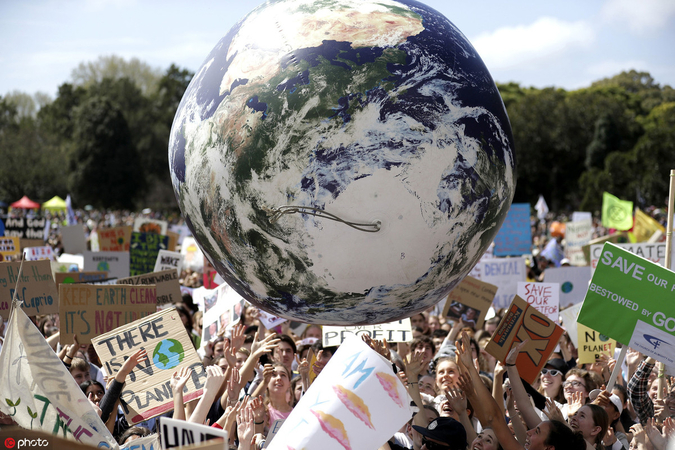 A large inflatable globe is bounced through the crowd as thousands of protestors, many of them school students, gather in Sydney, on Sept 20, 2019, calling for action to guard against climate change. [Photo/IC]

Ahead of the UN Climate Action Summit in New York on Monday, two high-level groups－one from China and the other from the European Union, within the framework of the Task Force on Carbon Pricing in Europe－met in Paris to jointly promote a China-EU initiative to fight global warming.

No challenge is more compelling than climate change. Across the world, people are aware, and worried, about its imminent dangers. This summer, the consequences of climate change on nature and livelihoods were visible at several places on our planet.

It is now clear that the efforts to curb carbon dioxide emissions are insufficient to keep global warming below the 2C target agreed to in the Paris Agreement in 2015.

The pace of climate change is accelerating. The Chinese and European groups, aware of the gravity of the situation, are considering strong measures to face up to the challenge.

The reason that the world is confronted with this situation can be attributed to the working of our market economies. When companies make decisions to produce and sell their products, they don't take into account its impact on society. The ever-increasing economic activities will lead to increases in carbon emissions, which leads to global warming at an exponential pace.

The measures that have already been implemented in many countries to curb carbon emissions should not be discouraged. But they are not enough. We should introduce carbon pricing that makes our market economies stabilize carbon emissions to a sustainable level.

Carbon pricing is a method adopted to penalize for CO2 emissions. The penalty, for example, is the amount to be paid for the right to emit CO2 into the atmosphere.

This method has already been adopted with success in many countries. The World Bank has backed it through the Carbon Pricing Leadership Coalition, which brings together leaders from government, private sector, academia, and civil society to expand the use of carbon pricing policies.

The EU and China have already taken steps in the right direction. The EU has implemented an emissions trading program under which companies that emit large amounts of CO2 should report their emission levels.

Companies that need to emit carbon have to obtain a permit. European authorities have control over the volume of carbon emissions permits, which determine the price of carbon. Today this price is £25 a ton. But the price remains volatile. Over the past few months, it has fluctuated, rising to nearly £30 a ton and again going down to£25 a ton.

We cannot rule out a further decline in the carbon price in the future. During the 2008-09 recession, within a span of a few months, the price of carbon dropped from £30 pounds a ton to £3 a ton.

China launched the world's largest carbon emissions trading market on December 19, 2017. Yet the price of carbon has remained low.

The two high-level groups in Paris are working closely to arrive at a consensus on the price of carbon between the EU and China.

A predictable and rising price of carbon is the best signal to all economic agents to stop global warming. For example, when the cost of carbon emissions becomes higher, then little by little, companies or power utilities will make efforts to bring down carbon emissions, which would eventually result in carbon-free production of electricity. The same logic applies to all activities that lead to greenhouse gas emissions.

That is why it is important for the EU and China to look at a higher price for carbon. In the EU, there is an urgent need to stop volatility in the price of carbon. In China, it would be desirable to ensure carbon pricing fully plays its role in mitigating carbon emissions.

Climate change being a global challenge, the world needs a global strategy based on carbon pricing.

That is why China and the EU, in line with their Common Commitments on Climate Change and Clean Energy－which they made public on July 16 last year in Beijing－should work together to arrive at a consensus on carbon pricing.

By doing so, it would send a strong message that the two main economic blocs are working hand in hand to avert the threat to life on this planet.

NOTE:Zhang Jizhong is secretary-general of the International Finance Forum. Edmond Alphandery is chairman of the Task Force on Carbon Pricing in Europe and former finance minister of France. The views do not necessarily reflect those of China Daily.