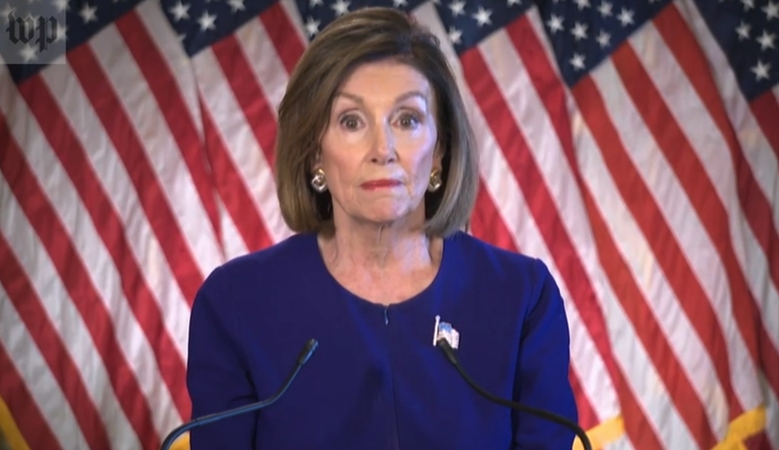 House Speaker Nancy Pelosi took the extraordinary step Tuesday of initiating impeachment proceedings against President Trump, accusing him of violating the Constitution in seeking help from a foreign leader to damage a political opponent.

Pelosi’s move came after Trump acknowledged that he urged the Ukrainian president to investigate former vice president Joe Biden, a contender for the Democratic presidential nomination who holds a wide lead over Trump, polls show, in a potential general election matchup. The revelation prompted a rush of moderate House Democrats to call for an impeachment inquiry into Trump, a step they had resisted for months. On Tuesday, Pelosi (D-Calif.) relented as well.

“The actions of the Trump presidency have revealed the dishonorable fact of the president’s betrayal of his oath of office, betrayal of our national security and betrayal of the integrity of our elections,” Pelosi said in a brief statement before a backdrop of American flags, repeatedly invoking the nation’s founders. “Therefore, today, I am announcing the House of Representatives is moving forward with an official impeachment inquiry.”

The confrontation between the Democratic-led House and Trump is likely to further divide a polarized nation ahead of the 2020 election while carrying implications for both parties. It remains unclear, however, who will capi­tal­ize politically over the next 14 months.

Trump immediately lashed out at the Democrats, tweeting, “PRESIDENTIAL HARASSMENT!”

The White House also scrambled to respond, announcing plans to release on Wednesday the transcript of his July 25 phone call with Ukrainian President Volodymyr Zelensky.

House Minority Leader Kevin McCarthy (R-Calif.) said in a statement that Democrats “have been trying to reverse the results of the 2016 election since President Trump took office. For them, this is all about politics. Not about facts.”

Pelosi and many in her caucus had resisted calls for impeachment from the party’s liberal base and several of the 2020 presidential candidates, citing the absence of public support and GOP backing.

But over seven days, the revelations that the president sought the help of Zelensky to investigate Biden infuriated Democrats, particularly lawmakers with national security credentials.

Trump has denied pressuring Zelensky by withholding nearly $400 million in foreign aid. Trump said Tuesday that he withheld the money over his concerns that the United States was contributing more to Ukraine than European countries were.

In a sign of the gravity of the situation, Rep. John Lewis, an influential member in the caucus, was one of the latest Democrats to back impeachment Tuesday. The Georgia Democrat, a staunch Trump critic and close Pelosi ally, had declined for months to weigh in out of respect for the speaker.

“There comes a time when you have to be moved by the spirit of history to take action to protect and preserve the integrity of our nation. I believe, I truly believe, the time to begin impeachment proceedings against this president has come,” Lewis said on the House floor. “To delay or to do otherwise would betray the foundation of our democracy.”

Congress has launched impeachment proceedings against a president only four times in the nation’s history. Pelosi’s move all but ensures that the House will vote on articles charging Trump with “high crimes and misdemeanors” in a matter of weeks, according to senior Democratic lawmakers and top leadership aides, who spoke on the condition of anonymity to discuss private deliberations.

The conversation, however, quickly turned to the president’s conversations with the Ukrainian leader. Trump insisted he had nothing to do with his administration’s refusal to share with Congress an intelligence community whistleblower complaint about his actions, according to individuals familiar with the call who spoke on the condition of anonymity to frankly describe the conversation.

Trump told Pelosi that he wasn’t the one blocking the complaint. “He said, ‘you know, I don’t have anything to do with that,’ ” she told her caucus.

She responded that he had the power to fix it and challenged him to turn over the complaint: “I said, ‘Well, then undo it.’ Undo it. Because you are asking the DNI to break the law. I mean, it’s just outrageous.”

The remarkable series of events on Capitol Hill will continue Thursday when the acting director of national intelligence, Joseph Maguire, who held back the whistleblower’s complaint from Congress, testifies before the House Intelligence Committee.

While the House could vote to impeach Trump, his ouster would require a conviction in the Senate, where Republicans were dismissive of Pelosi’s move as politically motivated.

“Speaker Pelosi’s much-publicized efforts to restrain her far-left conference have finally crumbled. House Democrats cannot help themselves,” said Senate Majority Leader Mitch McConnell (R-Ky.) “Instead of working together across party lines on legislation to help American families and strengthen our nation, they will descend even deeper into their obsession with re-litigating 2016.”

Impeachment has occurred only twice in U.S. history — against Presidents Andrew Johnson and Bill Clinton. Neither was removed from office. President Richard M. Nixon resigned in 1974 after the House initiated impeachment proceedings but before an official vote, stepping down rather than face the embarrassment of such a rebuke.

Trump, however, has signaled he is ready for a fight. Brad Parscale, his campaign manager, said in a statement Tuesday that “the misguided Democrat impeachment strategy is meant to appease their rabid, extreme, leftist base, but will only serve to embolden and energize President Trump’s supporters and create a landslide victory for the President.”

House Republicans wasted little time blasting out news releases taunting moderate Democrats in Trump districts for supporting impeachment. In a statement, the Congressional Leadership Fund, a PAC dedicated to helping House Republicans, said, “Democrats feeling euphoric in the moment, will awaken to a nightmarish hangover when they’re forced to defend their decision to their constituents back home.”

Protecting her majority was one of the main reasons Pelosi resisted impeachment until now, arguing that Trump was “just not worth it.” She had said any move to impeach would require bipartisanship and public support. She currently has neither, though the most recent polling on impeachment was conducted well before the Ukraine controversy erupted.

Before Pelosi made her announcement Tuesday, the speaker and her leadership team briefly considered the creation of a select committee to conduct the inquiry, with some in leadership questioning whether the House Judiciary Committee was up to the task. But liberals balked at the idea and defended Chairman Jerrold Nadler (D-N.Y.) and his ability to oversee the proceedings.

By the time Democrats huddled to discuss the historic move Tuesday afternoon during a somber caucus meeting, they appeared to be united.

“Unlike any other caucus meeting, there was broad consensus — I did not hear one word of dissent, and that’s the first time that I recall that’s occurred in a discussion of the president,” said House Intelligence Committee member Rep. Raja Krishnamoorthi (D-Ill.) upon exiting the meeting.

The House plans to vote Wednesday on a resolution condemning the administration’s efforts to block the release of the whistleblower complaint alleging that Trump’s promise to a foreign leader constituted an “urgent concern” to national security.

In a rare, albeit subtle protest from the GOP-led Senate, lawmakers adopted a resolution on Tuesday calling for the White House to turn over the complaint to the intelligence committees, as is required under law.

In a separate move, House Intelligence Committee Chairman Adam B. Schiff (D-Calif.) said the whistleblower wants to speak to his committee and is seeking guidance from Maguire about how he could do so.

“The times have found us,” Schiff told his colleagues during the Democratic caucus meeting. “And in light of the damning allegations the president has admitted to, the time is now.”

Biden on Tuesday called for Congress to begin impeachment of Trump if the White House continues to stonewall congressional investigations, including questions regarding reports that Trump asked the Ukrainian president to investigate Biden and his son, Hunter.

“I can take the political attacks. They’ll come, and they’ll go, and in time, they’ll soon be forgotten. But if we allow a president to get away with shredding the United States Constitution, that will last forever,” Biden said in brief remarks Tuesday afternoon in Wilmington, Del.