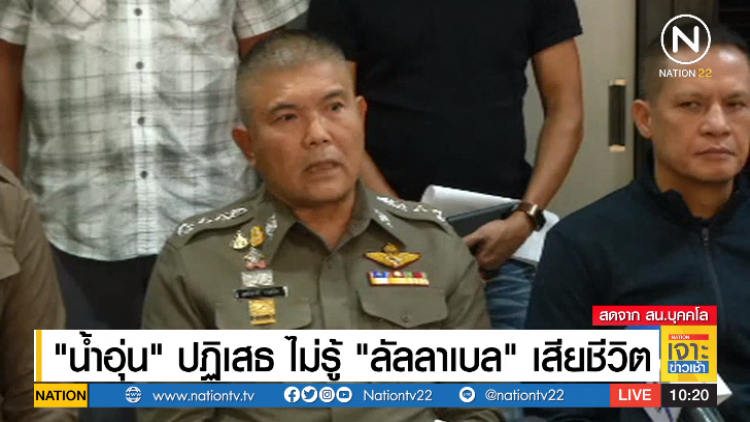 Male model Rachadech “Nam Oon” Wongthabutr has been brought into police custody under a court-issued arrest warrant over three criminal charges in relation to the death last week of a 25-year-old “pretties” model widely referred to by her nickname “Lunlabelle”.

Police are extending their investigation with the aim of also netting other suspects, Metropolitan Police Bureau chief Pol Lt-General Sutthipong Wongpin told the press on Wednesday.

The 24-year-old Rachadech was arrested on Tuesday night as he filled the tank at a gas station on Ratchadapisek-Tha Phra Road with his mother in the car. Rachadech, who was identified as the last person to be with the victim, denied the warrant’s three charges of alleged illegal detention resulting in another person’s death, taking away another person for a lewd act and molesting another person.

He maintained his innocence throughout a five-hour interrogation, while insisting that he did not realise that Lunlabelle might have been already dead at the time that he took her to his condominium in the Talad Plu area, Sutthipong told the press conference at the Bukhalo Police Station. Rachadech later left her in the condo lobby in the early hours of September 17.

On Tuesday, Metropolitan Police Area 8 chief Pol Maj-General Samrit Tongtao told reporters that the autopsy report initially cited the victim’s time of death as being somewhere between 3pm and 7pm.

Samrit declined to comment about biometric information obtained from the smartwatch that the victim was wearing on September 16. At the time, she was at a private party after being hired to pour drinks and entertain the guests. Samrit confirmed that the smartwatch, which has not yet been confirmed as qualifying as a medically certified device, would be included as evidence.

A police source, however, said the smartwatch’s biometric information was available until 5pm, which was around the time that Rachadech posted a video of her passed out at the party. If 5pm was later deemed to be when her heart had stopped, that would mean she was already dead by the time Rachadech took her to his condo room. She was there for six hours before he took her down to the lobby and left her.

The hosts of the private party, brothers Nathee Sathitpongsathaporn and Chaiyapol Panna, told reporters that they would let justice run its course so the wrongdoer(s) would be punished. The brothers have vowed their innocence in the death of Lunlabelle in front of the shrine of a supernatural being. They have also insisted that they did nothing wrong at the party, which some people have said it allegedly involved lewd acts and drugs.

Earlier this week, Samrit told reporters that the initial autopsy result found a high level of alcohol in Lunlabelle’s blood, suggesting she may have died from alcohol intoxication. No narcotics were found in the body. The initial result also did not find body fluids from another person in her body.

The mysterious death of the popular "pretties" model Lunlabelle has gripped the Thai public and netizens as a stream of viral CCTV footage and video clips, as well as other clues, have come out. This case has also exposed the entertainment business world where product-presenting models known as “pretties” make their living as “party entertainers” in exchange for high wages despite the risks to their personal safety.