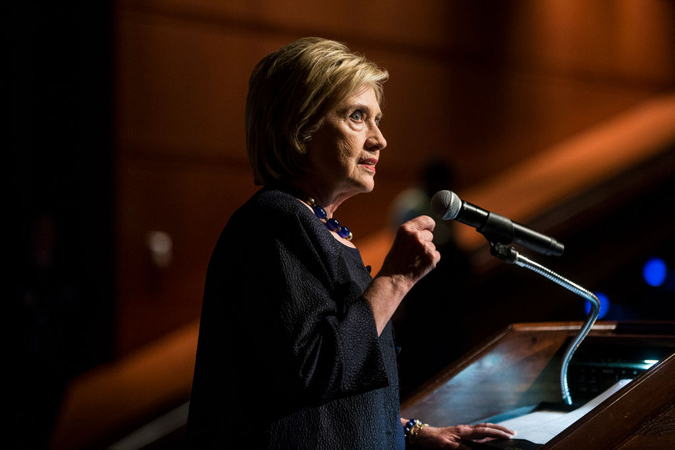 Hillary Clinton has dismissed President Donald Trump as an “illegitimate president” and suggested that “he knows” that he stole the 2016 presidential election in a CBS News interview to be aired on Sunday.

The former secretary of state, who lost the presidency to Trump, offered a scathing assessment of the president, his 2016 win and the latest allegations that he tried to obtain incriminating information from a foreign government about Joe Biden, a possible 2020 opponent, according to excerpts released by CBS from a wide-ranging pretaped interview for its "Sunday Morning" show,

Clinton was asked whether it angers her that none of the current Democratic candidates invoke her on the campaign trail while Trump’s rally crowds still break out into “lock her up” chants.

“No, it doesn’t kill me because he knows he’s an illegitimate president," she said. “I believe he understands that the many varying tactics they used, from voter suppression and voter purging to hacking to the false stories -- he knows that -- there were just a bunch of different reasons why the election turned out like it did."

In June, former president Jimmy Carter used similar language to diminish Trump’s presidency. Carter said that in his view Trump lost the 2016 election and was put in office by the Russians. Asked if he considered Trump to be illegitimate, Carter said, “Based on what I just said, which I can’t retract.”

The investigation by special counsel Robert Mueller concluded that the Russian government interfered in the 2016 election “in sweeping and systematic fashion” with the goal of helping Trump and harming Clinton. But the report drew no conclusion about whether the interference changed the result, and did not establish a criminal conspiracy by the Trump campaign.

Clinton compared her election loss to “applying for a job and getting 66 million letters of recommendation and losing to a corrupt human tornado. And so I know that he knows that this wasn’t on the level. I don’t know that we'll ever know what happened.”

Clinton, who was joined by her daughter, Chelsea, for the interview to promote their new book about women in history, also discussed her support for an impeachment inquiry into Trump. She said there are “a number of grounds” for it but that the latest news about his phone call with Ukrainian President Volodymyr Zelensky, when Trump asked Zelensky to investigate Biden’s son, is “incredibly troubling”.

She compared Trump’s latest effort to spread negative stories about Biden, who is leading in most polls to be the 2020 Democratic nominee, to what he did to her during their campaign.

“The most outrageously false things were said about me,” Clinton said. "And unfortunately, enough people believed them. So this is an effort to sow these falsehoods against Biden. And I don’t care if you’re for the [Democrats] or you’re a Republican, when the president of the United States, who has taken an oath to protect and defend the Constitution, uses his position to in effect extort a foreign government for his political purposes, I think that is very much what the founders worried about in high crimes and misdemeanours.”

Clinton also predicted Trump would lose in 2020 because “there were many funny things that happened in my election that will not happen again.”