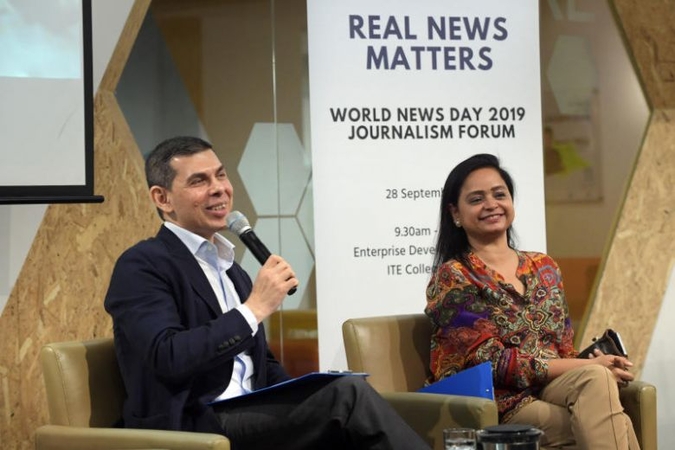 SINGAPORE - In an increasingly complex world with misinformation on the rise, journalists play a crucial role in providing reliable information to support reasoned debate.

That is why the work that professional newsrooms do, in fact-checking and ensuring a balanced, objective and unvarnished account of events, is so important, said Mr Warren Fernandez, editor of The Straits Times, on Saturday (Sept 28).

"The irony is this: While the world is more connected today and more people have much more information available at their fingertips, societies are not necessarily better informed or equipped to make the difficult choices we need to if we are going to address the many challenges we face," he said in his opening remarks at the Real News Matters journalism forum, which marked World News Day with a series of discussions.

"Instead, discussions turn into shouting matches, which tend to be dominated by those with the loudest, most nasty or persistent, or often, the best financed voices," said Mr Fernandez, who is also editor-in-chief of Singapore Press Holding's English, Malay and Tamil Media Group, and president of the World Editors Forum.

"Each one of us ends up the loser - it is your views, your society, your future that is degraded in the process."

He also warned of the rise of fake news, with more dubious content spreading rapidly over phones and social media.

The audience participated actively in asking questions, which ranged from how to deal with the speed at which fake news spreads, to how AskST, part of the publication’s efforts to fight fake news, deals with the volume of requests.

Dr Mustafa Izzuddin, a research fellow at the National University of Singapore's Institute of South Asian Studies, asked about self-censorship among journalists.

Mr Fernandez replied that there exists a fine line between self-censorship and exercising judgment.

"There are times when you have to exercise some judgment about what is appropriate in the context of your society," he said, pointing to the sensitive issue of race and religion in Singapore as an example.

Saturday's forum was held at the Institute of Technical Education (ITE) College Central and was jointly organised by the World Association of Newspapers and News Publishers and Singapore's National Youth Achievement Award Council.

The event, which saw around 100 attendees including students, journalists and members of the public, also featured two panels on the important impact that journalists create.

One of them was titled "It Changed My Life", named after an award-winning series by ST senior writer Wong Kim Hoh, who was one of the panellists.

The other panellists were Dr Mustafa, who talked about the relationship between academics and the media, and ITE College Central student Javier Ng, who shared how media coverage has helped in his anti-drug advocacy.

The panel was moderated by Ms Alysha Chandra, editor-in-chief of The Octant, a Yale-NUS College student publication.

Mr Wong spoke about his more than two decades of experience in journalism.

"When you do a story about an inspiring and interesting individual, the ripples and the effect that you can have can be very warm."

The other panel was made up of participants from the Asia Journalism Fellowship who spoke about their experiences in covering conflict.

Ms Kalani Kumarasinghe, features editor at Sri Lanka's The Daily Mirror, shared the panic and chaos of the bomb attacks that left more than 250 dead on Easter Sunday on April 21 this year, shattering a decade of relative peace.

"Imagine this. You are trying to interpret the bomb scare, and then there are fake news tweets coming up about bombs (going off)... even within our newsroom we were panicking because we saw a tweet saying there was a bomb right across our office," she said.

With her were Mr Maran Htoi Aung, editor of Myanmar's Kachin Waves, who spoke about the difficulty of gathering information and providing a balanced account on the conflict in his home state of Kachin; and Ms Victoria Tulad, senior correspondent at GMA Network, who spoke about her work in covering Philippines President Rodrigo Duterte's war on drugs.

Said Ms Tulad: "It is a privilege to witness history, but it is also our responsibility to make sure it is not forgotten."

Mr Koh Jun Jie, 18, said he learnt a lot from attending the forum and was inspired by some of the stories shared.

“I have a better knowledge of world events and what being a journalist involves,” said the Year 2 ITE College East student.