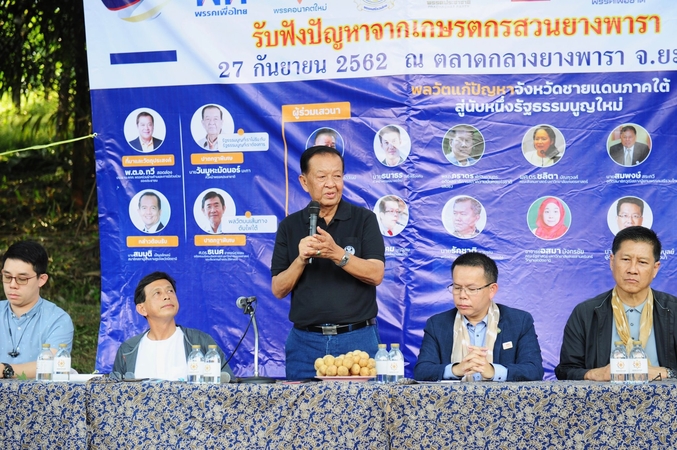 The current Constitution is not conducive to resolving the unrest in the deep South, said academics and opposition leaders who have been campaigning to amend the charter.

Seven opposition parties and academics hosted a debate on the Constitution in Pattani province in the South of Thailand on Saturday (September 28). Hundreds of people attended the event.

Chalita Bandhuwong, a lecturer at the Department of Sociology and Anthropology Faculty of Social Sciences at Kasetsart University, said that she was proud of the people in the three provinces as the majority there had rejected the 2017 Constitution. The controversial charter ignores the voice of the people while protecting only the interests of those in power, so people participation is needed for drafting a new charter, she said. The unrest in Pattani and other deep South provinces has been getting worse, she added, referring to the prolonged insurgency and military operation in the South that have claimed thousands of lives, and warned the current Constitution could not serve as a tool to resolve it.

She blamed the military’s role in the region. The Army has too much power of oversight over both military and police operations on security issues, promoting local social and cultural activities and supporting the living standards of the local people. “They have been associated with many issues,” she noted. In fact, it should not be done by the military. “To resolve the conflict, the country may not need to be a unitary state or a centralised state, so it is not unusual if Section 1 of the charter should also be changed,” she suggested. Section 1 states that Thailand is one and indivisible Kingdom.

Tawee Sodsong, president of the opposition whips, said that the junta-backed government had issued more than 400 laws, which were designed to protect the interests of a few elite group at the expense of the people. To make peace in society, understanding the issue is a pre-condition, he said. “Peace cannot be achieved with the blood of warriors, but it can be achieved with the ink of wise people,” he told the audience.

The opposition, academics, and civil society have been campaigning for amendment of the charter, as they argue that it has extended the military political power beyond the March election