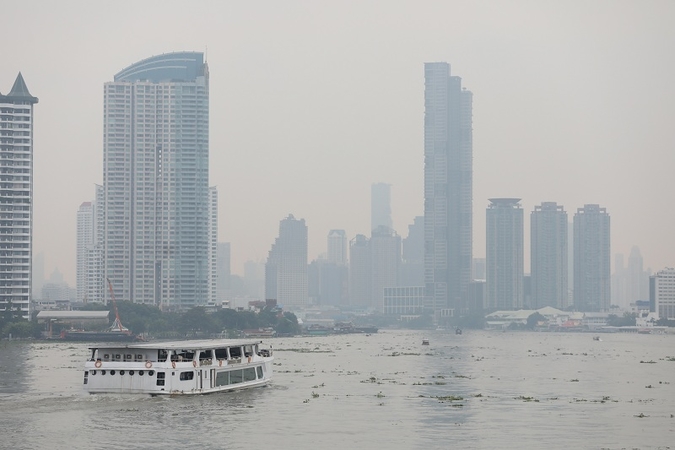 Coming rain and wind will reduce the toxic air in Bangkok, according to the city administration’s director of the Environment Department, Chatree Wattanakajorn, citing information from Thailand’s Meteorological Department.

Aswin Kwanmuang, the city governor, has meanwhile ordered directors of each district to follow up the problem of high levels of PM2.5 particulates, and collaborate with every organisation to help prevent actions that create the dangerous dust particles.

At this moment, the situation is not a crisis since the levels of fine PM2.5 dust particles don’t exceed 100 micrograms per cubic metre (µg/m³), said Aswin. The World Health Organisation safe limit for PM2.5 is 25µg/m³, though Thailand has set the limit at 50µg/m³.

Masterkool International Co Ltd has joined with Kasetsart University to offer a plan for an air-purifying tower project to aid in reducing the pollution.

The tower would initially be built nearby the Siam BTS Station. The density of PM2.5 dust particles would be measured both before and after the installation. If the result was satisfactory, other towers could be installed through collaboration with skyscrapers, shopping malls, and big event venues.

The air purifying tower would be 4 metres high, 1.5 metres wide and use 3.5kW to power the purifier. Its body would be made from stainless steel and weigh about 200 kilograms. Air would be sucked into HEPA filters to remove dust particles, before being released above the tower.

It could clean 17,000 cubic metres of air per hour, covering over 1,000 square metres of the nearby area and would cost Bt5.3 million each. The plan is to install 24 towers in 24 areas with high traffic density and large populations, including Ari BTS station, Asoke intersection, Chatuchak MRT station, and Victory Monument.

Chatree said the city’s environment department will buy six water trucks for dust control at Bt9 million each, under the 2020 capital budget. Though this kind of water truck has never been used in Thailand for dust control, is common in China, India and many European countries, Chatree said.

It is more effective than the fire trucks usually used to control dust in Thailand, as it is able to deal with all kinds of dust particles and is able to spray a 10-metre distance.