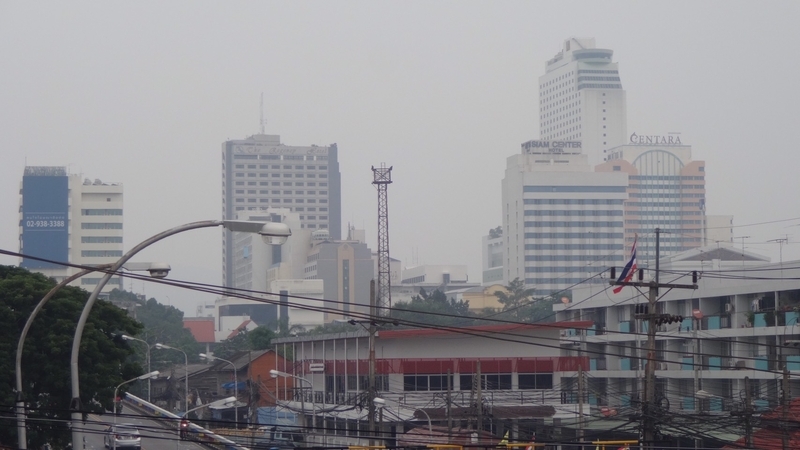 There is nothing new to the haze from forest fires on Indonesia’s Sumatra Island creeping across Malaysia, Singapore and southern Thailand as seen again this past week.

The problem has recurred annually since 1982, taking a toll on health, economies and international relations.

Most of the smoke comes from fires deliberately set on palm-tree plantations in Sumatra and Kalimantan to burn off dead stalks and prepare for fresh planting.

The production of palm oil is a major regional industry and Indonesia exports more than any other country, controlling a 54.5-per-cent share of the global market and earning US$16.5 billion a year. Malaysia ranks second with 28.6 per cent and income of $8.7 million.

To clear land of the remnants of the previous growing season using machinery or chemicals costs Bt6,000-Bt90,000 per hectare. Burning costs between Bt150 and Bt5,000. It’s an easy choice for farmers who care little about the consequences.

The World Bank estimated that the resulting severe haze crisis in 1997 trimmed 4.5 per cent off Indonesia’s GDP and about 0.3 per cent each from Singapore and Malaysia’s.

Damage to Indonesia’s GDP in 2015 was 1.9 per cent while Singapore lost 0.17 per cent as well as suffering an 80-per-cent plunge in tourism revenue.

The Asian Development Bank calculated that smog cost the region as a whole around $9 billion in 1997-1998 and widely affected “human security” and ways of life. Twenty million Indonesians sought treatment for respiratory ailments in 1997 and 21.56 million Malaysians, and schools and shops were closed for extended periods.

Indonesian law prohibits starting forest fires but the government has largely declined to enforce it adequately given the immense earnings to be made from palm oil. More recently, though, decentralisation has seen elections held at all administrative levels, leaving it up to provincial, district and sub-district officials to enforce the law, issue licences and grant concessions for land use as they see fit.

After the regional economic crisis of 1997 that soon spread globally, multinational corporations based especially in Singapore and Malaysia invested massively in palm oil in Indonesia, triggering conflicts of interest with government officials there. Both the Singaporean and Malaysian governments have imposed sanctions on Indonesian companies that set fires, but they have no authority to end the practice.

The Association of Southeast Asian Nations in 1995 endorsed the Asean Cooperation Plan on Transboundary Haze and Pollution and established its own Specialised Meteorological Centre to monitor air pollution and forest fires. In 2002 came the Asean Agreement on Transboundary Haze and Pollution to enhance regional cooperation regarding the law, surveillance and warnings. Indonesia ratified the agreement only in 2014.

But Asean cannot force member-countries to adhere to the agreement due to its principle of not interfering in any member’s internal affairs. And most member-countries are unaffected by the haze anyway. The task of ending the haze problem appears to rest solely with the Indonesian government.

The problem represents a challenge to all Southeast Asian nations and their businesses and citizens. How can a sustainable balance be achieved between economic growth and protecting people’s fundamental right to clean air?