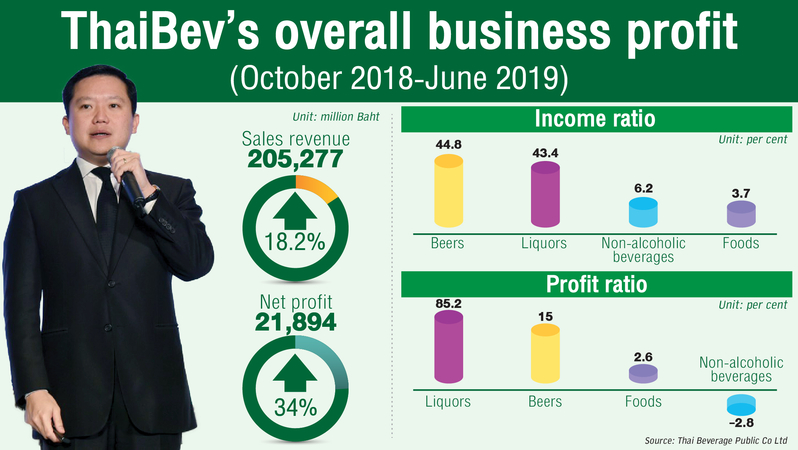 The beverage giant will next year invest Bt7 billion in “revolutionising” its beer-manufacturing facilities “for the first time in over two decades”, he said.

Thapana said ThaiBev has seen some of its 2020 objectives fulfilled, with sales topping Bt200 billion and Bt20 billion in profits.

“We have become Southeast Asia’s leader in beverage manufacturing and rank in the top five in Asia-Pacific. Many of our products won the title of ‘local champion’, such as Sabeco beer, which has 26 per cent of the Vietnamese market, and liquor products that have become top brands in Thailand and Myanmar.”

However, some ThaiBev products lag behind competitors, such as Chang beer, still in the shadow of Singha’s Leo in Thailand, and several of its bottled-water products and soft drinks.

Thapana said fiscal 2018-2019 will see the shift from ThaiBev’s 2020 vision to a 2025 vision, in which the focus will shift to promoting sustainable progress as a “total beverage manufacturer”.

“For six years, the company has been emphasising expanding business based on effective growth, product and market diversity, brand building, improving product reach and professionalism in the workplace,” he said. “These strategies resulted in a leap in business expansion, enabling us to acquire the KFC restaurant chain worth over Bt10 billion as well as branches of Starbucks.

“Our 2025 vision focuses on expansion in the region, 2030 will focus on improving products and the workforce with digital technology, and 2050 will focus on personnel development and penetrating markets emerging as a result of shifts in consumer trends,” Thapana said.

“‘Unlocking business values’ means we will strengthen our hold or consolidate groups of products by partnering with global leaders in different businesses,” he said. “This will help strengthen our financial structure, decrease debt and maximise growth capability.”

To “build new products”, ThaiBev will focus on innovations that respond to changing consumer lifestyles, such as investing in digital platforms. “We will also push for healthy and cannabis-based products, which are gaining popularity in Thailand,” Thapana said.

The planned Bt7-billion expenditure in 2020 will upgrade beer-manufacturing facilities and replace machines that have been in use for 25 years, he said. “This outlay doesn’t include in budget for mergers and acquisitions.”

“Non-alcoholic beverages have the potential to surpass alcoholic in terms of revenue, but the company will not abandon beer and liquor anytime soon, since the profit margin is still substantial,” said Thapana.

“As for future overseas expansion, we will focus primarily on Asian markets, especially Asean-plus 3, -plus 6 and -plus 9, which have combined population equal to more than half the world total. We will aim at emerging markets in Laos, Cambodia and Myanmar, which are expanding at 6 per cent on average, the highest among any emerging markets.”