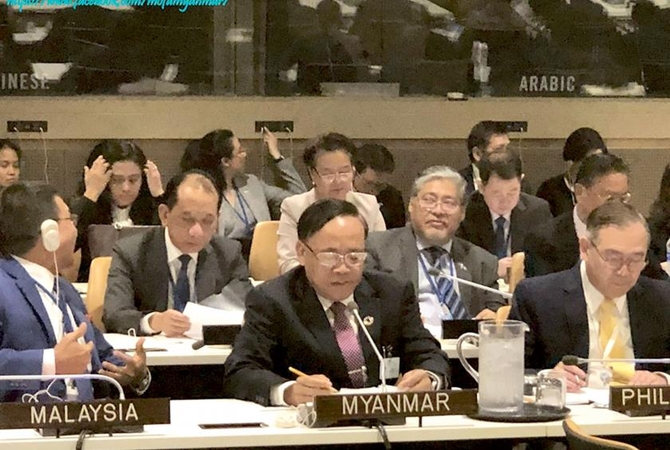 The government can’t accept the usage of Rohingya because it is in danger of demanding rights such as secession, said Union Minister Kyaw Tin of International Cooperation.

Kyaw Tin pointed out that the Bengalis who left for India were not named as a tribe, but those entering Myanmar were named as only the ethnic group.

“If those who fled to Bangladesh return to Myanmar, the government would accept them under the 1982 Citizenship Law, but they would not be accepted as an ethnic.

Only those who lived in Rakhine State before the annexation of the British were named as the ethnic,” Kyaw Tin added.

He added that the usage of Rohingya was not used before 1950, but later this word was invented. There was no Rohingya in historical documents.

In dealing with the issue of Rakhine State, the government has to avoid the use of word and therefore the situation can’t make progress as much as it should, Kyaw Tin continued.

“Dealing with the issue of Rakhine State does not advance toward the solution of the problem because the use of Rohingya and Bengali was complex. For that reason, the use of these words has to be avoided. Actually, those entering from India are India Burmese. Those entering from China are Chinese Burmese. Those entering from East Bengal are Bengalis. Bengalis are not Bangladeshi, but they mean Bengal Origin. There are Nepalese and Gorkha coming from Nepal. They do not demand the right of an ethnic group. They don’t invent it as the ethnic group, said Kyaw Tin.

Speaking at the ASEAN-UN Ministerial Meeting on September 28, Kyaw Tin said, “If one wishes to make Rakhine a secure and stable environment for the returnees, the government’s capacity to provide security and basic services for all communities must be strengthened not weakened. To that end, he concluded by welcoming the constructive support of partners willing to help with sincerity in resolving the problem.”