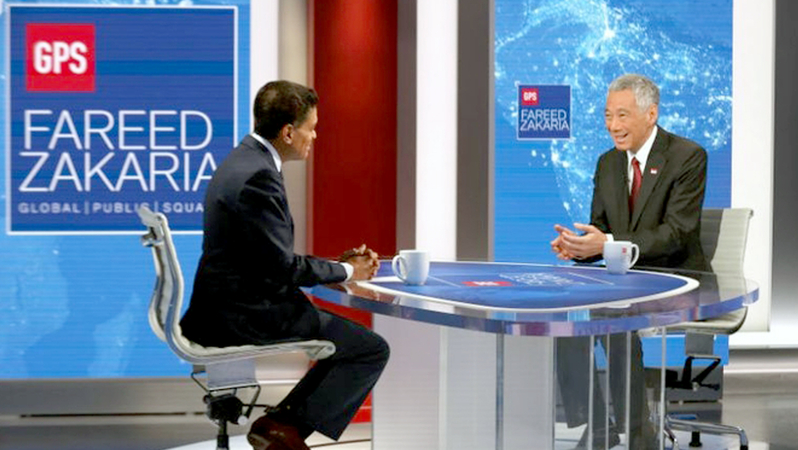 Prime Minister Lee Hsien Loong speaking to US broadcaster CNN's Fareed Zakaria in an interview which aired on Oct 6, 2019.PHOTO: MINISTRY OF COMMUNICATIONS AND INFORMATION

Most countries in Asia are reluctant to choose between America and China as such a choice would prove painful, Prime Minister Lee Hsien Loong said in an interview with US broadcaster CNN which aired on Sunday (October 6).

He noted that the United States' treaty allies in the region - Japan, South Korea, the Philippines, Australia, New Zealand and Thailand - all have China as their biggest trading partner. Asking them to choose would be putting them in a spot, he added.

"If you ask them to choose and say 'I therefore must cut off my links with my biggest trading partner', I think you will putting them in very difficult position," he said.

PM Lee did the interview with CNN's Fareed Zakaria for the presenter's GPS programme during his visit to New York last month. PM Lee also met US President Donald Trump during the visit.

Asked by Zakaria if he conveyed to Mr Trump the fear that America is withdrawing from Asia and ceding the field to China, PM Lee said he did not think the US is withdrawing. "America is engaging China very, very actively. It is not a happy engagement right now, but it is not pulling out from the field," he said.

He added: "If US-China relations are not stable and not amicable, it is much harder for all of us to do that. We will be pressured very hard to choose sides, and it will be a very painful choice."

He also said the ongoing trade tensions have been a problem, not just for Singapore which has good relations with both US and China, but also for the world.

"All of us have depended on stable US-China relations, increasingly close US-China economic cooperation, investments, trade, as well as flows of talent and ideas," he said. "The way things are going now, that benign trend is being disrupted, and perhaps even turned around. That is bad for the world."

Highlighting the US ban on Huawei products and the possible split between those who choose an American or Chinese technology supply chain, Zakaria asked if this would result in a bipolar world with two technology systems.

Lee said things are heading in this direction. "It says that basically you do not trust them, and you have reason to doubt whether everything can be taken at face value. By the same token, they are unable to trust you. They will ask why do we allow your operating systems, your chips, your technology to rule our economy, and we become hostage to you," he said. "If you go this way, you must end up bifurcated across a wide range of things in terms of technology and systems. The rest of us carrying two handphones is the least of our problems."

Asked how difficult it was for Singapore to navigate these tensions, he said: "The Americans are asking people to choose. They are asking their partners around the world to not choose the Chinese systems."

He added: "Some partners have agreed to cooperate with the Americans, others have concluded that this is a very big ask."

Asked about Hong Kong, PM Lee said he feels very sorry for the situation it is in. It has a lot of talent, enterprise and potential, he noted.

"They are right on the doorstep of China and China has been a backstop for them, which enabled them to grow and overcome many economic rough spots," he said. "But at the same time, they are part of China, and this is a big psychological change, which is not easy for the population to get used to."

"Fundamentally, it is a question of hope for the future of young people. If these are not radically addressed, it is very difficult to overcome the problems," he said.

Asked if he was surprised that Beijing had not shut down the protests using force, PM Lee replied: "They are now confronted with this frog in their hands and what do I do with it? I am uncomfortable, it is a problem. But if I do the wrong thing, I can make things a lot worse.

"They are very conscious of that. They hope that the Hong Kongers can sort it out. The chief executive has a very difficult task," he added.