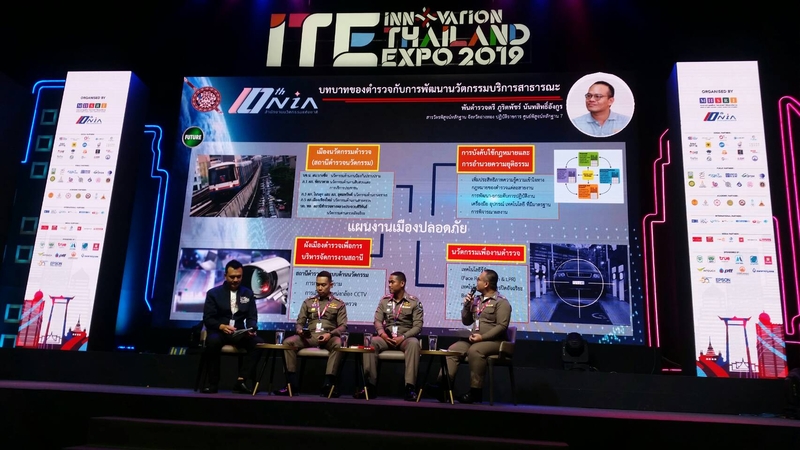 The Royal Thai Police is cooperating with the Higher Education, Science, Research and Innovation Ministry to create an IoT (internet of things) GPS tracker and smart checkpoint to efficiently deliver public services and prevent crime.

Pol Major Phuritpach Nantasitangoon, a forensic scientist at Ang Thong’s Scientific Crime Detection Centre 7, said: “This cooperation will help boost national security and new technology created to help the society can also be sold to other countries and help generate revenue for the country.”

He was speaking at the “Police Role and Innovation Development on Social Service” seminar organised by the National Innovation Agency (NIA) as part of the “Innovation Thailand Expo”.

The police bureau and the ministry are cooperating on promoting safe driving with NB-IoT GPS tracker, an innovation to prevent the theft of vehicles, smart checkpoints and devices to track speed.

Pol Lt-Colonel Woraphat Sukthai, an inspector at Bang Sue Police Station, said his station is experimenting with NB-IoT GPS Trackers by initially installing them in 360 police motorcycles. The tracker shows real-time information on the location of the motorbikes.

“This helps the central-command centre to have police officers arrive at a crime scene quickly, thus boosting officers’ performance and ensuring the safety of people,” he said. “But these devices are too expensive for individuals to use in their cars, as they go for Bt7,500 apiece plus another Bt300 per month for internet service, so we have called on the National Science and Technology Development Agency [NSTDA] for cooperation.”

NSTDA’s National Electronics and Computer Technology Centre (NECTEC) has come up with approximately 200 new devices that go for Bt1,500 per piece and require internet service that costs no more than Bt50 per month. Meanwhile, the NIA has set a budget of Bt1.3 million to develop the cheaper tracking system and is urging Bang Sue police officers to test the 200 devices on their vehicles.

These trackers can track the location of the vehicle and send real-time information to the Bang Sue Police Station, so they can immediately know if there is a crash, a breakdown or fire. It also tracks the speed at which the vehicle is being driven and can be used to track motorbike taxies in a move to protect passengers.

“When officers have to track a suspect car, the system can provide them with information about the time the car has passed the checkpoint, the number of passengers in the car and other pertinent information, so the car can be tracked quickly.

“The Highway Police plans to install this system by January 2020,” he said.