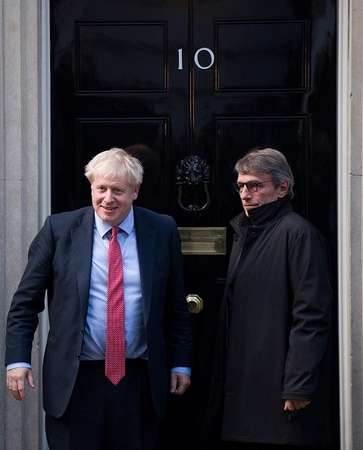 An anonymous official in Boris Johnson’s office told broadcast reporters on Tuesday that negotiations with European leaders over Brexit were “essentially impossible” after the British prime minister concluded a telephone conversation with German Chancellor Angela Merkel.

European officials hit back that Johnson was trying to blame them for a breakdown in talks.

“What’s at stake is not winning some stupid blame game,” tweeted European Council President Donald Tusk. “At stake is the future of Europe and the UK [United Kingdom] as well as the security and interests of our people.

The hazy smoke signals from 10 Downing Street increased the possibility that Britain may exit the European Union at the end of October without a deal of any kind. That was once seen as a doomsday scenario, but Johnson has embraced it, promising that Britain will leave the trading bloc “do or die” in three weeks.

An anonymous source in Johnson’s office briefed British broadcasters about a morning call between Johnson and Merkel, asserting that the Europeans would not budge an inch.

“It was a very useful and clarifying moment in all sorts of ways,” the British official was quoted as saying. “If this represents a new established position, then it means a deal is essentially impossible, not just now but ever.”

The statement from London caused bafflement and pushback in Europe.

The British account did not sound like Merkel, diplomats pointed out. Over the past three years, the chancellor has consistently allowed for more talks, more time for Britain to figure out what it wants from Brexit and to offer solutions.

Merkel’s office remained tight-lipped on Tuesday, saying it did not discuss details of private conversations. The chancellor did not address the issue during a televised statement alongside the visiting Estonian president on Tuesday evening.

Later in the day, Johnson’s official spokesman told reporters that “discussions are ongoing in Brussels” but also stressed that talks were at a “critical point” and that a compromise must now come from Europe.

After Johnson submitted Brexit proposals last week that crossed EU red lines, European Commission spokeswoman Natasha Bertaud said it was on the British side that additional work needed to happen.

Johnson faces a series of deadlines. The European Council meets next week ‒ one of the last possible times to approve a withdrawal deal before the October 31 exit date. The British Parliament has passed a law ordering Johnson to ask the EU for a Brexit delay if he has not sealed a deal with the bloc by October 19.

How to tackle the issue of Northern Ireland, and avoid the reintroduction of customs checks with the Republic of Ireland, which will remain part of the EU, has been one of the thorniest complications in reaching a deal on Brexit.

The 1998 Good Friday Agreement brought an end to a hard border there, after decades of sectarian conflict, and there are fears that bringing back a border would not only disrupt lives and business but also be a magnet for new violence.

The EU has been critical of Johnson’s proposal to reintroduce customs checks.

The anonymous source in Johnson’s office was quoted as saying: “Merkel said that if Germany wanted to leave the EU, they could do it, no problem. But the UK cannot leave without leaving Northern Ireland behind in a customs union and in full alignment forever.”

The Merkel call made clear that Europe is “willing to torpedo the Good Friday Agreement”, the source said.

Use of words such as “torpedo” suggested to analysts that the briefing was deeply partisan.

“The UK government’s attempt to shift the blame for the Brexit fiasco to anyone but themselves ‒ today it’s Merkel ‒ is pathetically transparent," said Scottish First Minister Nicola Sturgeon, who opposes both Johnson and Brexit.

Ireland’s foreign minister, Simon Coventry, said it wasn’t his country’s fault there was a stalemate.

“No country wants a deal more than Ireland, but we will not strike a deal at any cost,” he told a news conference in Dublin.

Coveney declined to directly criticise Johnson, saying instead there was a “lot of misinformation” circulating.