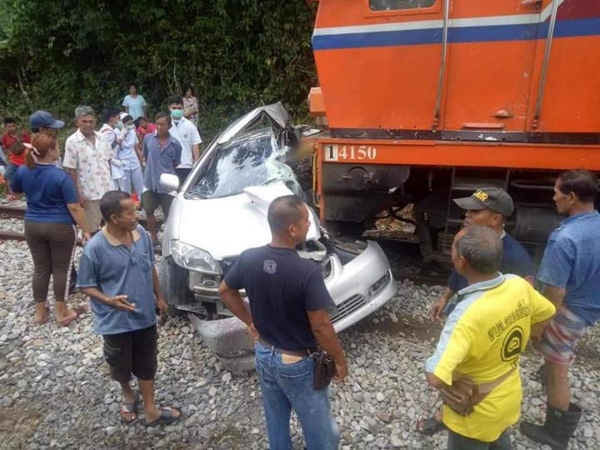 Officers from Kantang Police Station rushed to the railway crossing on Patiew-Klongcheelom Rd. in Klongcheelom subdistrict where they found the wreckage of a bronze Toyota Vios sedan, license plate Kor Tor 8747. It had been hit side on by the locomotive of express train no.167 travelling from Bangkok. The driver and passenger were later identified as brothers Thossaporn Sitthipan, 28, and Sorawit, 25, both from Kantang. Sorawit had got married the day before.

Wiwat Amphan, who witnessed the accident, said he saw the car trying to cross the railway but the driver was unable to make it in time and was hit by the oncoming train. “The crash was so devastating that the train dragged the car wreckage along the track for about 800 meters, causing a loud screeching noise,” he said. “This crossing is very dangerous and I hope that State Railway of Thailand will install a proper barrier to prevent future accidents.”

The bodies were taken for autopsy to Kantang hospital.