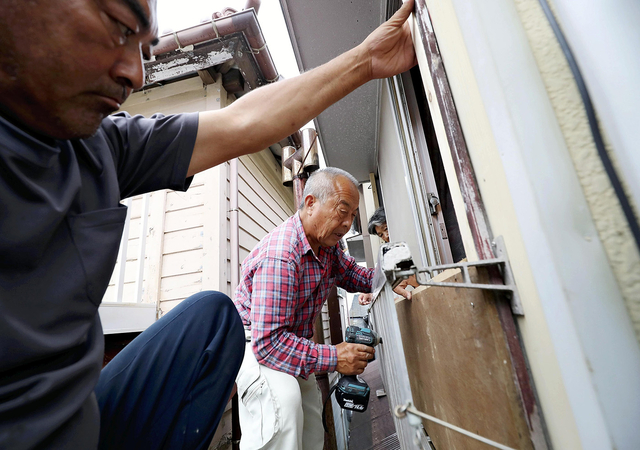 TOKYO (The Japan News/ANN) - East Japan Railway Co. (JR East) and Tokyo Metro Co. said that they will suspend some train services on Saturday, as Typhoon No. 19, a powerful super typhoon, is expected to make landfall in the Tokai or Kanto regions.

As Typhoon No. 19, a powerful super typhoon, is expected to make landfall in the Tokai or Kanto regions Saturday afternoon without losing its intensity, railway operators such as East Japan Railway Co. (JR East) and Tokyo Metro Co. said Friday that they will suspend some train services on Saturday.

The Japan Meteorological Agency called for strong caution. It said a special heavy rain warning could be issued for areas such as the Tokai and Kanto regions, as the scale of the typhoon could be equivalent to that of the Kanogawa typhoon in 1958, which left more than 1,200 people dead or missing.

According to JR East, among its conventional lines in the Tokyo metropolitan area, services will be suspended on the Tokaido Line around 10 a.m. on Saturday, while suspensions are planned for the Keihin-Tohoku Line around noon and the Yamanote Line around 1 p.m.

Services on Shinkansen lines such as the Tohoku, Joetsu and Hokuriku lines also will be reduced from around 11 a.m. and suspended fully after noon. Suspensions are expected to continue until at least Sunday noon.

Tokyo Metro plans to suspend operations for some sections of six subway lines, including the Marunouchi and Tozai lines, in stages with operations halting around 1 p.m. Saturday. The Keio and Inokashira lines, which are operated by Keio Corp., will stop operating around 2 p.m., while Odakyu Electric Railway Co. will halt services on all its lines around 3 p.m.

Central Japan Railway Co. (JR Tokai) has decided to cancel bullet train services on the Tokaido Shinkansen Line between Tokyo and Nagoya on Saturday. It plans to operate only six inbound and outbound trains between Nagoya and Shin-Osaka stations, departing between 6 a.m. and 7 a.m.

As for flights, All Nippon Airways has canceled all domestic flights to and from Haneda and Narita airports on Saturday. Japan Airlines decided to cancel 513 domestic flights.

Due to rain clouds associated with the typhoon, areas centering on eastern Japan are likely to be hit by a record level of heavy rainfall. In the 24 hours through 6 a.m. Sunday, rainfall is expected to be 600 to 800 millimeters in Tokai, 400 to 600 millimeters in Kanto-Koshin and 300 to 500 millimeters in Hokuriku and on the Izu islands.

Oriental Land Co., the operator of Tokyo Disney Resort, said Friday that Tokyo Disneyland and Tokyo DisneySea will be closed Saturday due to Typhoon No. 19.

Both theme parks in Urayasu, Chiba Prefecture, are expected to be closed until around noon on Sunday. According to Oriental Land, this is the first time that the theme parks will be shut for an entire day because of a typhoon.