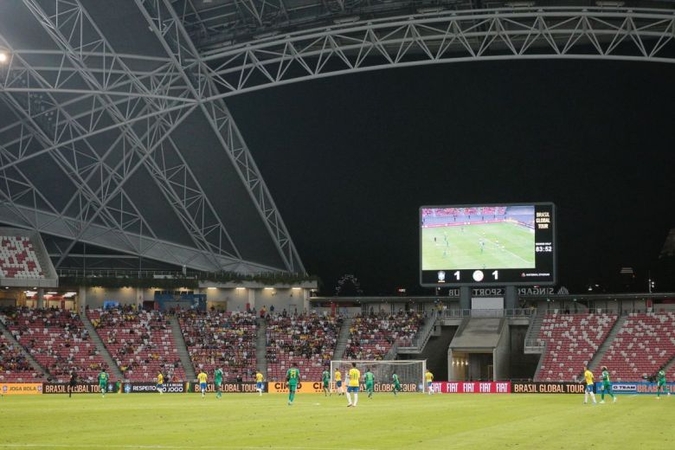 Brazil playing Senegal in a friendly at the 55,000-capacity National Stadium in Kallang on Oct 10, 2019. World Cup stadiums are required to seat at least 60,000 fans for the semi-finals and 80,000 for the opening match and final. ST PHOTO: JASON QUAH

SINGAPORE - The 10 Asean nations have agreed to establish a technical working group, led by Thailand, to look into the feasibility of a joint bid to host football's 2034 World Cup, said a joint statement on Friday (Oct 11) issued by the bloc's sports ministers and heads of delegation after the Asean Ministerial Meeting on Sports in Manila.

The working group will also include four core members from Singapore, Indonesia, Malaysia and Vietnam, with other Asean members welcome to join the group.

Malaysia will host the first meeting in Kuala Lumpur, where the Asean Football Federation and Asian Football Confederation are based, said the statement.

"We further support the submission of bid by Indonesia to host the Fifa U-20 World Cup in 2021," added the statement.

A Bangkok Post report on Wednesday said Thailand would be leading a joint five-nation bid and the proposal for a joint bid was agreed at the four-day Manila meeting.

This follows Thai Prime Minister Prayut Chan-o-cha's announcement of the joint bid at the Asean Summit in Bangkok in June.

Mr Phiphat reportedly said on Wednesday that the participants at the meeting had agreed that Thailand would lead the joint bid and he would seek approval from the cabinet. This is the first time that Singapore has been officially named as one of the host countries for the joint bid.

Other countries that have shown interest in staging the 2034 World Cup include China, Egypt, Nigeria, Zimbabwe and joint bidders Australia and New