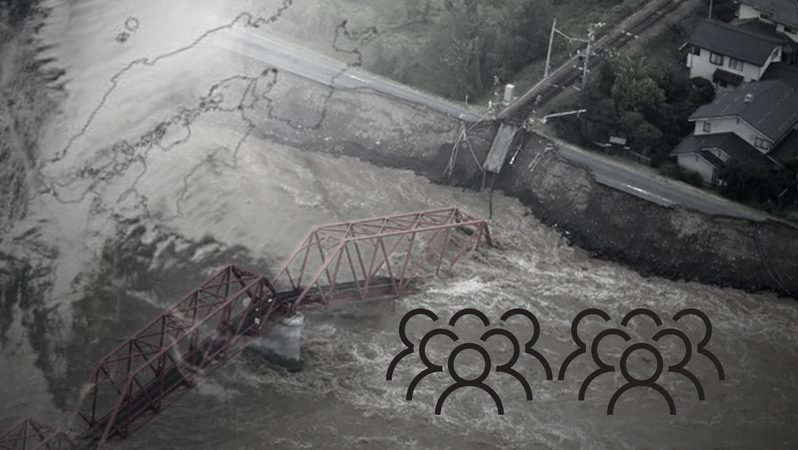 Japan has deployed at least 100,000 security personnel in search and rescue operations.

Powerful Typhoon No. 19 devastated parts of eastern Japan as it plowed across the Tokai, Kanto and Tohoku regions and passed over the Pacific Ocean on early Sunday morning.

According to a Yomiuri Shimbun tally, as of 3 p.m. on Monday, the typhoon had claimed the lives of 52 people in 11 prefectures, with 168 people injured. Sixteen people are missing.

The Geospatial Information Authority of Japan has released a map of affected areas, indicating the depth of flooding around rivers. Flooding is believed to have reached a maximum depth of about 4.3 meters near the Chikuma River and 5.2 meters near the Abukuma River.

The authority analyzed still and video images taken from the air by a Land, Infrastructure, Transport and Tourism Ministry helicopter as well as photos posted on the internet.

In Iwaki, Fukushima Prefecture, a 77-year-old woman who was being airlifted from a submerged house by a Tokyo Fire Department helicopter on Sunday morning fell about 40 meters to the ground. The woman was taken to hospital but later died from her injuries.

According to the fire department, its air rescue crew was dispatched at the request of the Fukushima prefectural government. It is believed the crew failed to correctly attach the harness that was used to hoist the woman up to the helicopter.

Kanagawa and Chiba prefectures have also suffered severe power outages. Power is expected to be restored in most areas by Wednesday. However, it is believed that some areas in Ichihara, Kamogawa, Kyonan and Futtsu in Chiba Prefecture may be without power until around Oct. 20.