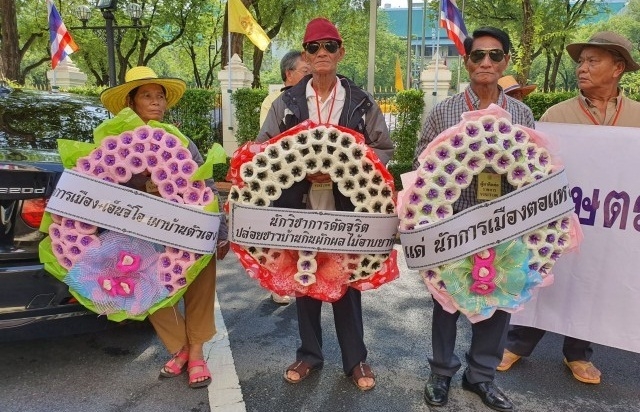 The president of the cassava farmers group, Vashira Tanadaka and 60 farmers from Nakhon Ratchasima presented wreaths to Mananya Thaiset, the deputy minister who plans to ban Paraquat, Glyphosate and Chlorpyrifos at the Ministry of Agriculture and Cooperatives yesterday, telling her that the banning of Paraquat is illogical although they agree with the bans on the other two chemicals.

Vashira asked the deputy minister to stop claiming that the chemical is dangerous to people and citing incorrect information from Non-Government Organisations (NGOs). He also stressed that the farmers need Paraquat because it doesn’t leak into the top soil and is safe for the roots of the cassava.

The group noted that the ban and the dissemination of “incorrect” information would affect the prices of agricultural products and the standard of industrial manufacturing. Cassava processing meets the requirements of quality assurance systems including the International Organization for Standardization (ISO), Good Manufacturing Practice (GMP), and Hazard Analysis Critical Control Point (HACCP).

Meanwhile, the Office of Commodity Standards conducts regular checks of products and has not found traces of the chemical in cassava, indicating the processed product is uncontaminated and safe for human consumption.

In addition, the ban on Paraquat would affect farming costs, along with the flour and chip industry and exports, Vashira said.