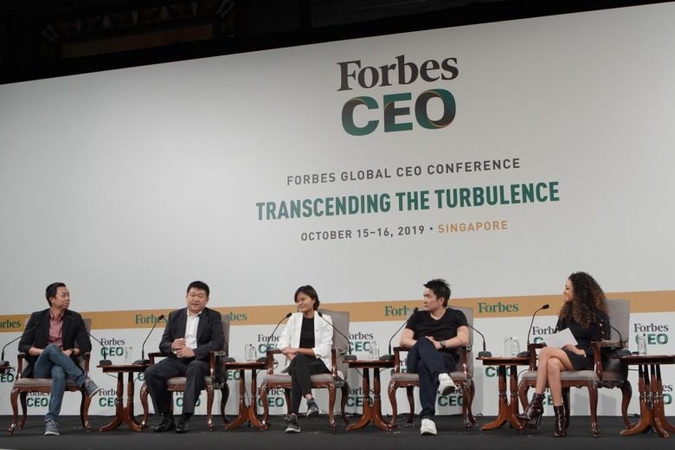 SINGAPORE - The Asean region is a goldmine of opportunities, and it is a region that technology company Grab calls home and knows best, said the company's co-founder Tan Hooi Ling.

"We are sitting on a really fantastic goldmine. We are fortunate that South-east Asia has been, in so many ways, underserved to date," she added.

She was responding to a question posed by the moderator of a panel called Unicorns: Fast Take-off on Wednesday (Oct 16) about Grab's expansion plans.

The four-person panel representing Grab, Razer, Sea and Klook, which covered questions on the companies' growth plans, was held on the second and last day of the Forbes Global CEO Conference held at the Shangri-La Hotel.

Ms Tan said South-east Asia remains a bright spot amid the gloomy global economy, and that companies around the world are looking to grow in the region.

"Why go elsewhere when everybody else is trying to come here?"

She added that companies were copying and pasting solutions that they developed in more mature markets for the Asean region when Grab, which is based in Singapore, started in 2012.

"That wasn't quite true, when it came to services that, like ride-hailing, have a physical aspect as well as a technology, operational, online aspect," Ms Tan said.

She noted that the problems that Grab tries to solve are issues that she and Grab's other co-founder Anthony Tan grew up with, and thus can come up with better-tailored solutions.

Moderator Rana Wehbe, who is an editor at Forbes, also asked during the discussion whether the unrest in Hong Kong had affected business operations there.

"But the good thing is, as a global travel company... every now and then, we will face these types of obstacles. Last year, there were major typhoons and earthquakes in Japan, for example," he said.

"What's good about the global platform is that, as long as consumers are travelling, they will be choosing a different destination for the time being. So, we are able to... see people travelling more into South-east Asia."

Stocks of Razer, which is listed in Hong Kong, rose to as high as HK$5.49 on its first day of trading in November 2017, 41 per cent above the HK$3.88 price of its initial public offering, when the San Francisco and Singapore-based company raised HK$4.1 billion.

Mr Tan said: "Things were great, and then the trade war came about... Tech stocks took a beating."

"We have a massive market out there... We see huge amount of growth in the gaming industry. We have always been laser-focused in what we do," he added.

He said: "Having gone through the public listing, it afforded us a huge war chest. To be candid, we haven't actually used most of the war chest.

"We have just seen so much opportunity for us to be able to scale from here."

Mr Forrest Li, chairman and group CEO of Singapore-based Sea, which runs gaming company Garena and online marketplace Shopee, said the company had done well by focusing on an underserved e-commerce area by identifying that the electronics space was already crowded.

"Instead, we really focused on... categories such as fashion, home living and health and beauty."