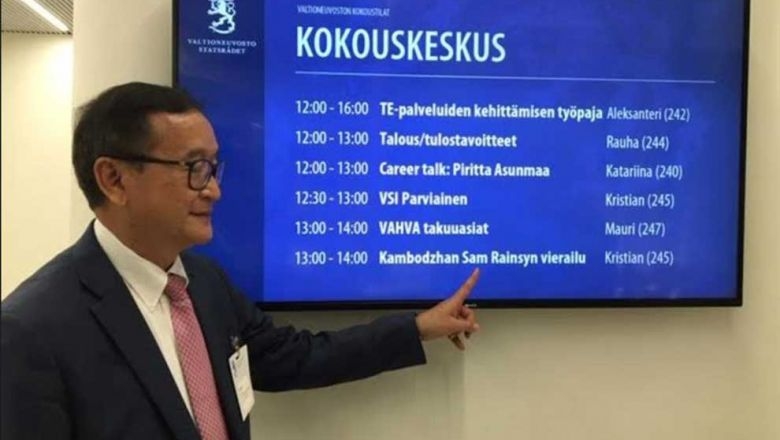 A senior Thai police official has said that Sam Rainsy (pictured in Helsinki, Finland) would not be granted a visa if he intended to cause unrest in Thailand. SAM RAINSY VIA FACEBOOK

A senior Thai police official has said that Sam Rainsy, the “acting president” of the Supreme Court-dissolved Cambodia National Rescue Party (CNRP), would not be granted a visa if he intended to cause unrest in Thailand.

Thai news website MGR Online on Tuesday quoted Lieutenant General Suwat Chaengyotsuk, an assistant to the Thai national police chief, as saying Rainsy would meet supporters in Thailand ahead of a summit of Asean leaders in Bangkok early next month.

Rainsy has announced that he will return to Cambodia on November 9 to arrest Prime Minister Hun Sen using “people power”.

Suwat said that while his plans were not known for certain, Thai police had received information that Rainsy intended to “carry out activities” during the Asean meeting.

“We have received information that there could be a group planning demonstrations, but the police have measures in place to maintain order.

“If he is intending to affect national security, we would consider not allowing Sam Rainsy to travel to Thailand,” Suwat said.

He said the Thai government had readied for 10,000 police officers to keep security at the 35th summit for Asean leaders, which will be held in a northern suburb of Bangkok on November 4-5.

The development comes after Rainsy announced he intended to return to Cambodia via the Thai border accompanied by migrant workers.

Rainsy made the remarks at a meeting with liberal parliamentarians from several countries on Monday in the Serbian capital, Belgrade. He also called on liberal countries to pressure the Cambodian government from using force against him and his supporters when he entered Cambodia.

“I intend to come to Cambodia through Thailand. Two million migrant workers are living there and most of them support [the CNRP]. They want to join me in walking across the border into Cambodia,” Rainsy claimed.

Government spokesman Phay Siphan said the Cambodian government welcomed strengthened collaboration between Cambodia and Thailand. The Thai announcement also demonstrated adherence to the principle of non-interference in the internal affairs of Cambodia, he said.

“We don’t yet know for sure if the information is correct. But the matter was posted on social media. If there has been such an announcement, the Ministry of Interior would certainly know about it.

“If so, we congratulate [the Thai authorities on] the announcement and the collaboration between Cambodia and Thailand,” Siphan said.

Ministry of Interior spokesman Khieu Sopheak said Phnom Penh welcomed the collaboration between the Thai and Cambodian governments. The two had often cooperated in the past to arrest wanted suspects, Sopheak said.

“The Thai authorities have provided us with this information. They say that if the convict Sam Rainsy intends to cause unrest in Thailand, the authorities will not grant him an entry visa,” he stressed.

Kin Phea, the director of the International Relations Institute at the Royal Academy of Cambodia, said he considered the announcement by the Thai police to be part of collaborative efforts with Cambodia to stop offenders.

Thailand, he said, would cooperate with Cambodia by arresting Rainsy and bringing him to justice.

“We see that [the Thais] place value on good relations between the two countries . . . it shows clearly that the Thai authorities will cooperate with Cambodia in the case of Sam Rainsy,” Phea said.

The Cambodian Ministry of Foreign Affairs and International Cooperation announced last month that arrest warrants for Rainsy had been sent to all 10 Asean member states.