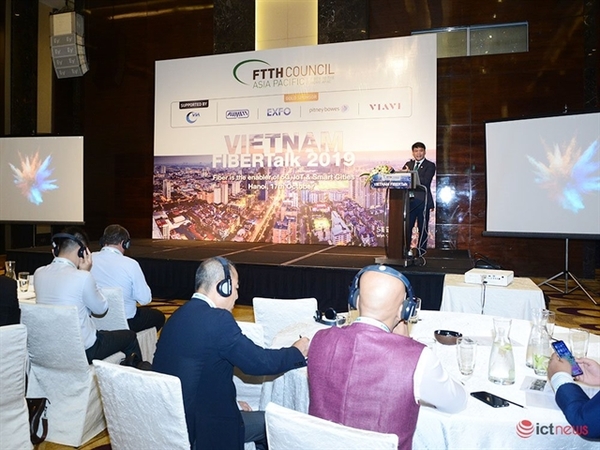 The Ministry of Information and Communication (MIC) will soon announce a roadmap for full termination of the second generation network (2G) technology to release broadband support for 3G, 4G and 5G.

The statement was made by Phan Thao Nguyen, director of the International Cooperation Department under the MIC, at the Vietnam FIBER Talk 2019 conference, organised by the FTTH Council Asia-Pacific and the Vietnam Internet Association (VIA) on Thursday in Hanoi.

Held on the theme ‘Fiber is the enabler of 5G, Smart city & IOT’, the Vietnam FIBER Talk 2019 served as a platform for discussions between domestic and foreign experts in the telecommunications industry.

With this event, the FTTH Council Asia-Pacific kick-started the preparation for the 15th annual  “FTTH APAC Conference” expected to be held in Hanoi in May.

According to Nguyen, Vietnam has 132 million mobile phone subscriptions, of which 3G and 4G subscriptions make up about half, with the other 50 per cent 2G users.

“The Ministry of Information and Communications will soon announce a roadmap to completely switch off 2G technology and shift to 3G and 4G broadband technologies,” Nguyen told the conference.

Nguyen added that the MIC will also begin work on 5G as early as possible, possibly at the end of this year, to enhance the performance of the Internet of Things (IoT).

“Vietnam does not want to be slower than other countries in the operation of its 5G broadband network,” he said.

The ministry has granted test 5G frequencies to some large operators to trial 5G services in some major cities.

The improvement of both landline broadband (fibre optic cable, copper cable) and wireless broadband (3G, 4G, 5G) transmission are crucial to the development of telecommunication infrastructure development and the prosperity of the country, Nguyên said.

He quoted the report of the World Telecommunication Union (ITU) as saying that when a country increased the density of landline broadband usage by 10 per cent annually, GDP can grow by 0.38 per cent.

Vietnam has more than 14 million landline broadband subscribers out of a total of more than 96 million people. Therefore, the rate of density usage is only about 16 per cent, showing great room for improvement, Nguyen said.

Regarding the 5G testing process, Viettel is the first and only network provider that has tested 5G services, Luong Phạm Nam Hoang, Deputy Head of Licensing and Market Department under the MIC’s Authority of Telecommunications, said.

With positive results in preparing 5G, Viettel aims to complete a 5G broadcasting station version 1 in 2019, test 5G station network by 2020 and be ready in 2021.

“Two other large providers, MobiFone and VNPT, are expected to launch 5G tests in October and November this year, respectively,” he said.

The MIC has proposed policy incentives that would boost the digital transition. The incentives aim to encourage the completion of the 4G network and then quickly move on to 5G to prepare for IoT.

“These technologies require the transformation in network infrastructure. It is a prerequisite that Vietnamese businesses need to fulfil,” Quang said.