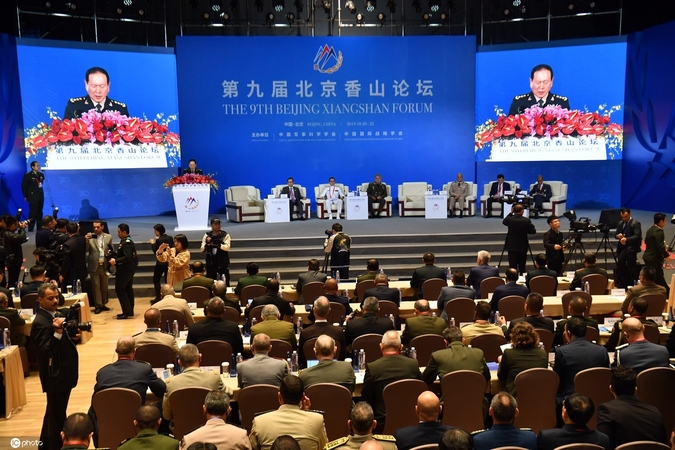 China is willing to work together with countries in the Asia-Pacific region to tackle security challenges, but it is resolute in safeguarding its sovereignty, security and development interests, senior military officials said on Monday.

In his congratulatory letter to the opening of the ongoing ninth Beijing Xiangshan Forum, President Xi Jinping called for Asia-Pacific countries to jointly address security challenges, safeguard international order and facilitate the long-term peace of the region via dialogue and cooperation.

Maintaining lasting peace and prosperity in the Asia-Pacific is in the common interest of all countries and regions in the area, and it will require different countries to contribute their wisdom and ability, said Xi, also general secretary of the Communist Party of China Central Committee and chairman of the Central Military Commission.

While facing complex security threats, nations should unite and uphold the global order with the United Nations as its core, continue to optimize security partnerships, and create security mechanisms that are suitable to the region's development and situation, he said.

Launched in 2006, the forum is China's premier multilateral platform to discuss Asia-Pacific security and defense issues. It is sponsored by the China Association for Military Science and the China Institute for International Strategic Studies.

This year's forum has drawn more than 600 military personnel and representatives, including 23 defense ministers. Seventy-six delegations from various countries and international organizations, including the United Nations, the United States, Russia, Egypt, Vietnam and Brazil, are attending the forum, which makes the event the largest of its kind.

In the keynote speech delivered at the forum on Monday, General Wei Fenghe, state councilor and minister of national defense, made clear the Chinese military's resolution in safeguarding national interests. He said China will not accept or be intimidated by "big stick diplomacy" or "long-arm jurisdiction", which he said are ineffective in solving problems.

Calling China the only major country that is still striving for national reunification, Wei said that the momentum of China's reunification cannot be stopped by any individuals or forces. "We will not relinquish a single inch of territory passed down from our forefathers."

Wei warned that the Chinese military will not allow Taiwan secessionists to keep making reckless and desperate moves, nor will it allow foreign forces to interfere in the Taiwan question. "National reunification is the only rightful path, and pursuing secession is a dead end," he said.

When discussing China's military-to-military relations, Wei said it is normal for countries to have their differences, but "China hopes countries around the world will treat each other with fairness and respect, not bullying the weak or acting condescendingly".

He added that China will never attach any political strings, force nations to take sides, interfere in other countries' domestic affairs or push its agenda onto others.

Wei said that China-US military-to-military relations, while seeing their fair share of issues, are still generally stable, but both countries should enhance cooperation in properly managing risks and tackling common challenges.

Wei also called for a new type of security partnership based on equality, mutual trust and win-win cooperation, given current risks and challenges.

When tackling global security issues ranging from terrorism to cybersecurity, "no country can insulate itself and be disconnected from the world. Only through dialogue and joint effort and mutually beneficial actions can we find a way to let all people from the world live a better life," he said.

Russian Defense Minister General Sergei Shoigu said at the forum that growing Russia-China military relations provide a shining example of a security partnership based on equality, mutual trust and practical cooperation, which has also contributed positively to overall bilateral ties as well as peace and security in the region.