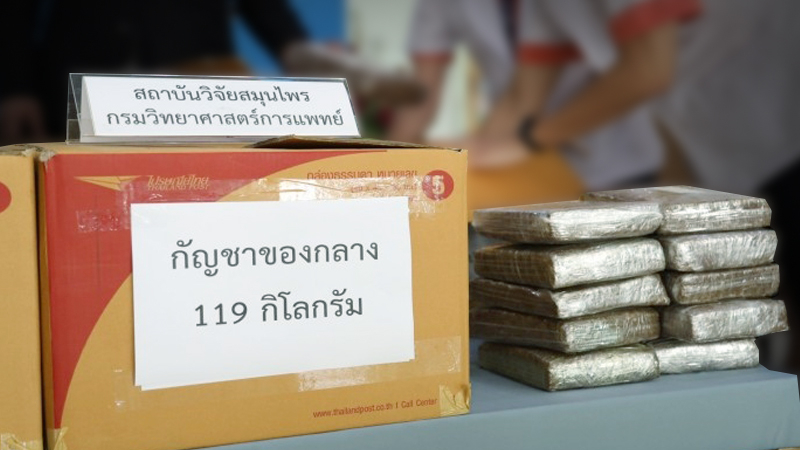 Niyom Termsrisuk, secretary general at Office of the Narcotics Control Board (ONCB) said on Thursday (October 24) that his agency is preparing to deliver 122 kg of seized marijuana in its possession to medical agencies to use in research.

“Of this amount, 119 kg of cannabis will be delivered to the Herbal Research Institute, while 3 kg will go to Bureau of Drug and Narcotics. Both are under the Department of Medical Sciences,” he said. “The cannabis has already been tested for cadmium toxicity and pesticide residue to make sure it is safe for research and consumption.”

Since July of last year, ONCB has delivered more than 1,862 tonnes of seized marijuana to hospitals and research agencies including Chaophraya Abhaibhubejhr Hospital, Phra Ajarn Fan Ajaro Hospital, Department of Medical Sciences, Department of Thai Traditional and Alternative Medicine and Chulalongkorn, Kasetsart and Maha Sarakham universities. These agencies have used the marijuana for research and produced at least 800,000 bottles of medical cannabis oil or Cannabidiol (CBD), which is used to treat several diseases including Parkinson’s and Crohn's.

Niyom revealed that research agencies and hospitals have already submitted requests for more than 3 tonnes of seized marijuana from ONCB but added that the marijuana seized from drug operations is usually contaminated with high levels of heavy metal and pesticide. “Marijuana that is not safe will be destroyed according to ONCB’s regulations,” he said.