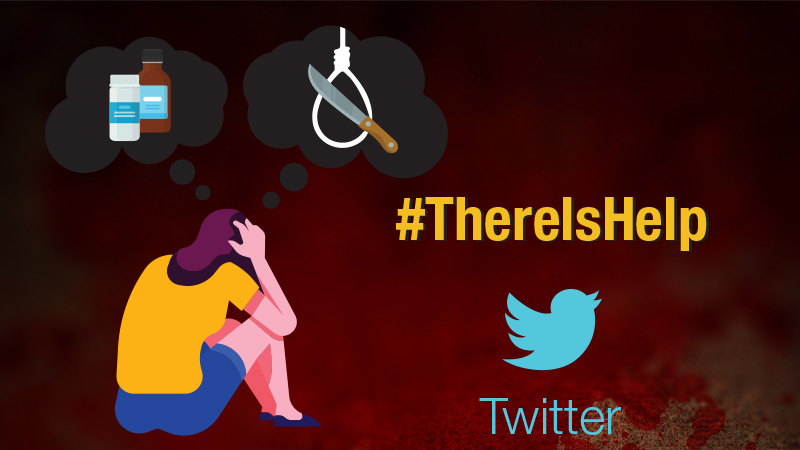 The Samaritans of Thailand, a non-government organisation (NGO) for the prevention of suicide, has launched hashtag #ThereIsHelp on Twitter with notification for people with mental health issues who may search for topics and messages related to “suicide” or “self-harm”. It allows mental health experts to listen to their problems and give advice.

The notification will appear in Thai and show the telephone numbers of the Samaritans of Thailand (@Samaritans_Thai on Twitter) and the Department of Mental Health (@PR_dmh on Twitter), making help readily available for those at risk.

Twitter has been trying to make hashtag #ThereIsHelp accessible for those who are likely to commit suicide or cause self-harm for two years. Now, the hashtag is available in 17 countries including Thailand and will be further expanded. It has also provided hashtag #AdsForGood to the Samaritans of Thailand to widen accessibility.

On World Mental Health Day, October 10, The World Health Organisation revealed that there were 800,000 people committing suicides every year or one in every 40 minutes. Suicide is the second leading cause of death in people aged between 15-29 years around the world.

Twitter believed that to deal with the mental health issues, a collaboration between NGOs and the public and private sectors is crucial and realised its role and duties to assure that people with risk factors can get help when they need it.

It is hard to prevent suicide, but Twitter was certain that the awareness of health problems is a key to lower the suicide rate while many communities on social media have given strong support to those in need and encouraged them to seek help. These communities have continued to expand.

Several NGOs use Twitter as a platform to raise awareness on this particular issue as it can be reached globally. Many mental health service providers have used Twitter to access adolescence clients, reflecting the change in communications.

Twitter also has set up a special report form for people at risk of suicide, to be sent to the experts.

Whenever there is a notification of suicide or self-harm, the system will contact the sender and inform him/her via online platforms or emergency phone calls and encourage them to ask for help.