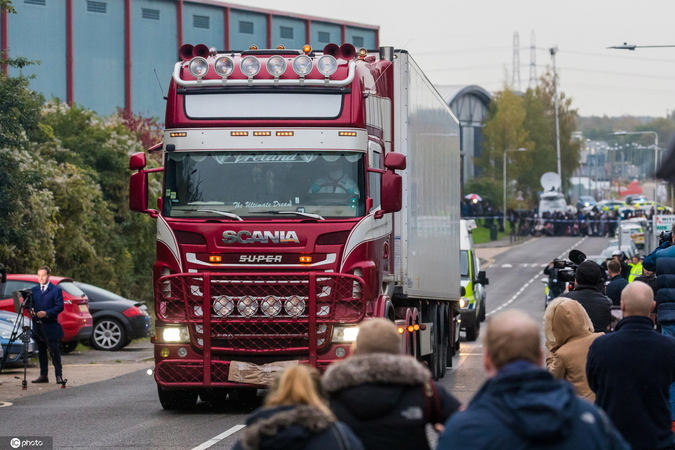 Police drive the lorry container along the road from the scene in Waterglade Industrial Park in Grays, Essex, Britain on Oct 23. A total of 39 bodies were discovered inside a lorry container in the early hours of this morning, and pronounced dead at the scene. [Photo/IC]

China is calling for joint efforts to counter human smuggling after the discovery of 39 bodies, reported to be Chinese nationals, in a truck in Essex, United Kingdom.

Foreign Ministry spokeswoman Hua Chunying told reporters at a regular news conference that China could not yet confirm the victims' nationalities or identities but has been working in close cooperation with local authorities.

"The British police are still in an intensive process of verification and are still unable to confirm (nationalities) at the moment," Hua said. "But I think that no matter where these victims come from, this is a great tragedy that has drawn the attention of the international community to the issue of illegal immigration.

"I think the international community should further strengthen cooperation in this area, strengthen sharing of information and intelligence in this regard, and conduct early intervention in these activities so as to prevent such tragedies from happening again."

Two additional people, a man and a woman, both 38, from Warrington, in Cheshire, England, have been arrested on suspicion of manslaughter and conspiracy to traffic, the BBC reported on Friday. The driver of the truck also is being questioned.

GPS data from the refrigerated trailer that held the bodies shows that it had crossed back and forth between the UK and continental Europe in the days before the 39 bodies were found by ambulance workers at Waterglade Industrial Park in Grays, a town 40 kilometers east of London, around 1:40 am on Wednesday.

Belgian officials said the eight women and 31 men may have been locked in the trailer at temperatures as low as -25 C degrees for at least 10 hours after the trailer arrived at the port of Zeebrugge on Tuesday.

Post-mortem examinations are due to be carried out on victims, with 11 being taken by ambulance from the Port of Tilbury to Broomfield Hospital, Chelmsford, on Thursday evening.

The Chinese embassy in London has sent a team led by the minister-counselor in charge of consular affairs to Essex, where they met with local police. Police said that they are verifying the identity of the deceased, whose nationality still cannot be confirmed officially despite earlier reports they were from China.

An Essex Police spokesperson said recovering all the bodies from the trailer would take time and the dignity of the victims was the primary concern.