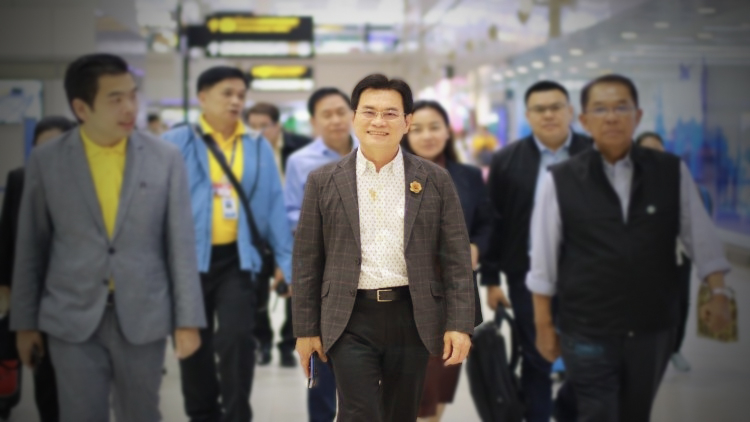 Commerce Minister and Deputy Prime Minister Jurin Laksanawisit was in Phuket and Phang Nga yesterday (October 25) to conduct a regional inspection and attend a meeting on the construction of Phang Nga Airport construction.

Jurin was accompanied by the Deputy Minister of Transport, Thaworn Senniam and an inspector from the Office of the Prime Minister and his team.

“The important focus of this meeting is to discuss the construction of Phang Nga Airport so that it can serve the high number of tourists who come to the Andaman region and relieve the strain on Phuket International Airport,” Jurin explained.

The airport can currently support 12 million visitors but tourist numbers are now around 18 million. “Studies indicate that Phang Nga Airport would have the capacity to handle about 25 million passengers,” he noted.

Yesterday’s meeting concluded that the new airport is necessary to help alleviate tourist congestion and assigned the Deputy Minister of Transport to coordinate with relevant agencies to select an executive of the Airports of Thailand to take charge of the construction project.

The meeting also instructed the governor of Phang Nga to monitor the airport issue closely, with follow-up duties assigned to the inspector from Office of the Prime Minister who will report to the Prime Minister.

Jurin and his team also surveyed the location for the new airport, which will be spread over some 7,300 rai.” “Earlier surveys found no suitable land in Phuket for the construction so Phang Nga was chosen for the propject,” Jurin said.