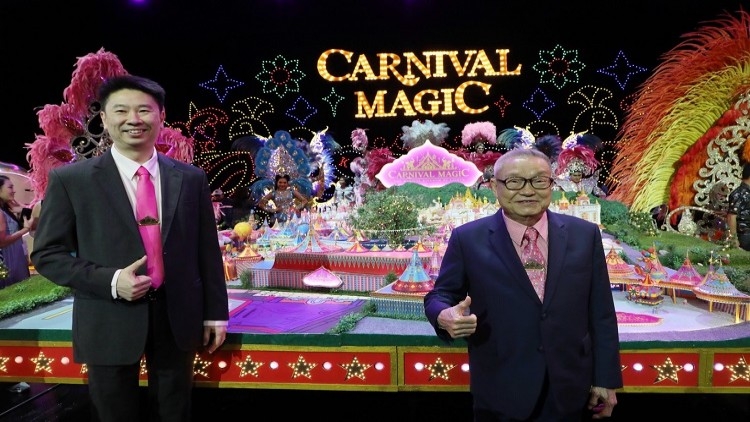 Phuket is soon to get another tourist attraction with the opening early next year of “Carnival Magic”, the first “Town with Thai Style Lights” theme park in the world on Kamala beach, Phuket FantaSea chairman Pin Kewkacha announced on October 25.

Located on 100 rai next to Phuket FantaSea, Carnival Magic is costing Bt5 billion and the three years of construction will soon come to an end with the attraction expected to open in the first quarter of 2020.

“Carnival Magic is a theme park that showcases Thai culture through technology and lighting,” Pin explained. “We are confident that this new theme park will go well beyond the imagination and quickly become popular among both local tourists and visitors from overseas.”

Phuket FantaSea chief executive Kittikorn Kewkacha added that this project was first floated back in 2002 after FantaSea had been in operation for four years and the number of tourists visiting Phuket continued to increase.

“We aim to draw 1 to 2 million tourists from other countries to visit the theme park. We anticipate they will make up 70 per cent of the total number and will be key to generating revenue at least Bt1.50 billion a year.”

The Carnival Magic has four main zones: “Carnival Fun Fair” zone is a shopping street with a festival atmosphere that offers rides for children, “Bird of Paradise” zone consists of a 3,000-seat buffet-style eatery plus a luxury restaurant called River of Bliss, the design of which is inspired by the Loy Krathong Festival.

The “River Palace theatre” zone is home to a large theatre spread over 16,000 sqm, with 2,000 seats and a massive stage measuring 70 x 22 metres which will be used for the greatest indoor parade performance named “River Carnival”.

“Kingdom of Lights” zone is a town decorated with more than 40 million of lights. The highlight is “River of Lights” that uses millions of lights to decorate on the curved steels in a uniquely Thai unique design around a lagoon named “Luminarie” that stretches for 50 kilometres.