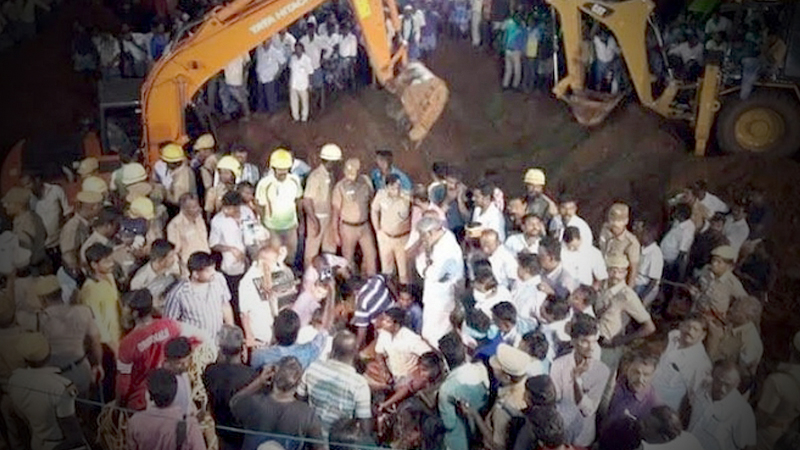 Tamil Nadu Health Minister C Vijaya Baskar said that the presence of hard rocks in the area has made digging difficult, adding that the rescue operation is in the final stage.

Rescuing the toddler, who is stuck in a borewell in Tamil Nadu’s Tiruchirappalli district since October 25, may take another 12 hours, according to an official of the Disaster Management and Mitigation Department.

Meanwhile, the two-year-old boy’s condition is said to be stable.

According to Revenue Department Commissioner, a pit has been dug up to 40 feet so far near the borewell in Nadukattupatti, where the operation is underway to rescue the toddler.

Radhakrishnan said it may take about 12 hours to dig about 100 ft. After that, a horizontal tunnel will be burrowed to get to the borewell to reach the boy.

He said it was initially estimated that drilling the new hole would be completed in 6-10 hours.

Tamil Nadu Health Minister C Vijaya Baskar said that the presence of hard rocks in the area has made digging difficult, adding that the rescue operation was in the final stage.

“The rig deployed to dig a hole near the borewell has gone to a depth of only about 40 ft owing to the rocky terrain,” he said.

Meanwhile, Prime Minister Narendra Modi hoped for the speedy rescue of the boy and said that he has spoken to Tamil Nadu Chief Minister Edappadi K Palaniswami regarding the rescue efforts underway to save Sujith.

“Every effort is being made to ensure that he is safe,” PM Modi tweeted.

Initially, earthmoving equipment was pressed into service to dig a pit near the borewell to reach the boy. But, it was stopped midway as the terrain was rocky. Besides, it was felt that this process could cause vibrations that may loosen the soil inside the borewell, thereby slipping the boy further down.

Later, the rescue team used a special equipment ‘borewell robot’. But that too was not successful.

Several teams with their own technologies have tried to rescue the boy, but all that has so far failed.