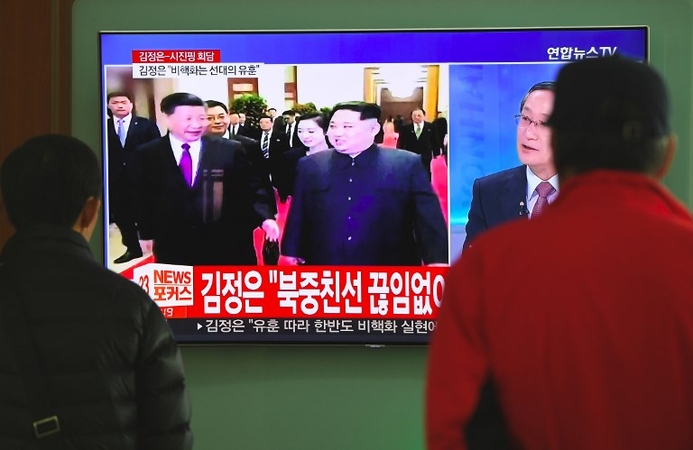 Talks between the two leaders of the US and DPRK have been stalled as Trump faces an onslaught at home.

North Korea on Tuesday continued to pressure Seoul and Washington, accusing the allies of raising tensions and saying their policies will determine the future of the peninsula.

Speaking at the Non-Aligned Movement summit in Azerbaijan, Choe Ryong-hae, president of the Presidium of the Supreme People’s Assembly, accused the US of aggravating the situation on the peninsula.

Choe went on to say that the lack of progress in US-North Korea relations is caused by Washington’s “anachronistic hostile policies” that destabilize North Korea.“The Korean Peninsula situation is at a critical juncture, whether the situation rides on the current of easing tensions to stable peace or a return to crisis,” Choe was quoted as saying by the North’s Rodong Sinmun.

“Only when the US irreversibly withdraws hostile policies, can denuclearization discussions with the US be held.”

Choe’s remarks reiterate North Korea’s position, which has also been voiced by other high-level officials, including Kim Yong-chol, vice chairman of North Korea’s ruling Workers’ Party, according to Park Won-gon, a professor of international politics at Handong Global University

In a statement issued Sunday, Kim said the US has not met Pyongyang’s demands for a change in “calculation method” in negotiating with North Korea. Kim also claimed that the US was using “more cunning and wicked” methods to “crush” North Korea.

Kim’s statement went on to say that the good relationship between the North Korean and US leaders is the only thing keeping relations on track, but warned that their relationship is not a guarantee against deterioration of US-North Korea relations.

“The North has pressured the US since the Sweden talks, but there are no changes in US policies,” Park said.

As for the comments regarding the South, Park said that Choe appears to be expressing displeasure at Seoul’s inability to resume Kumgangsan tours and reopen the Kaesong industrial park.

“The message to the South is the same. In his New Year’s speech, Kim Jong-un said that he is willing to resume Kumgangsan and Kaesong (projects) unconditionally, as if doing (the South) a favor. But they are not something the South can do.”

Park added that the fact that Choe delivered the speech could have symbolic significance. As Choe is president of the Presidium of the Supreme People’s Assembly, his speech could be interpreted as Pyongyang stating that it will not engage in talks unless Washington changes its approach.