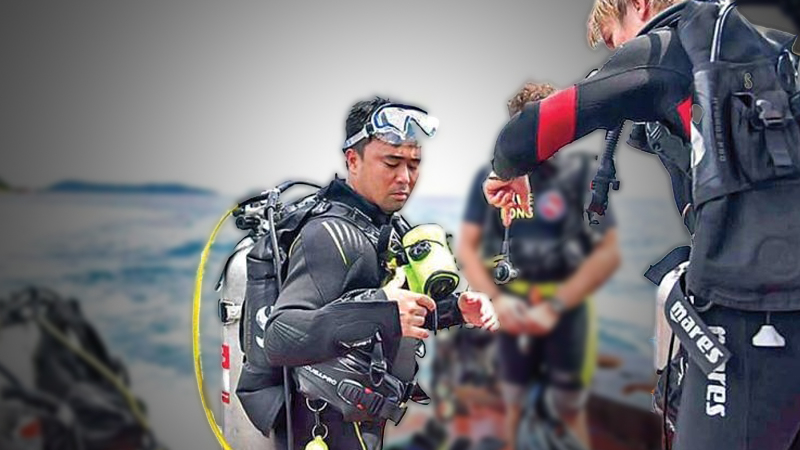 Divers participate in the search for missing British backpacker Amelia Bambridge on Thursday, the day the 21-year-old’s remains were recovered from the sea some 50km from Koh Kong. Photo supplied

The body of missing British tourist Amelia Bambridge was found in the sea some 50km from Kong Rong on Thursday, a week after she disappeared upon leaving a beach party on the popular holiday island.

The body was found in the sea close to the maritime border with Thailand at around 11am.

Amelia’s brother, Harry Bambridge, who was in Cambodia to help in the search effort, confirmed on Facebook that the body found in the sea was that of his sister’s, the BBC reported.

“I’ve just seen her and I can confirm it’s my little sister Amelia. I’m so sorry to all her friends and family, there’s nothing more I wanted than to bring her back alive and I really tried.

“I’m sorry to you Amelia Bambridge, the round is on me when we meet again in heaven,” he posted.

Deputy Navy Commander Tea Sokha told The Post that while the body was decomposed, distinctive tattoos led to the conclusion it was that of Bambridge.

Bambridge had a tattoo of a Highland cow on her forearm and two cat tattoos on her legs.

“So far we do not know the cause of death. It is too early to conclude whether she died from drowning or another reason,” Sokha said.

He said local fishermen had supplied the information as to the location of the body. Her remains, he said, have been returned to Koh Rong and were being taken to Sihanoukville.

The 21-year-old was on her gap year, and she began her travels on September 27, flying first to Vietnam to meet her father, who works there as a teacher. They both travelled to Cambodia before she went to Koh Rong.

Bambridge was last seen leaving a party on the island’s Police Beach at around 3am last Thursday. She was due to leave Koh Rong for Siem Reap later that day.

Preah Sihanouk provincial governor Kuoch Chamroeun told The Post on Thursday that there was nothing as yet to suggest foul play in her death. Amelia Bambridge’s body was recovered from the sea on Thursday. Photo supplied

“We have found a body in the water near the Thai border. We are yet to carry out an been no crime linked to her death because she was still wearing her clothes and earrings,” Chamroeun said.

Five members of Bambridge’s distraught family, including her mother and father, travelled to Cambodia to help in the search.

Bambridge’s sister, Sharon Schultes, who had also travelled to Cambodia to help in search efforts, offered her thanks on Facebook for the help the family had received.

“I have had the most horrific confirmation that my sister Amelia Bambridge was found and she is no longer with us. It breaks my heart to let all my close family and friends know the horrendous outcome that we didn’t want.

“Now we have to get our Amelia back home to England so we can lay her beautiful soul to rest and to remember the wonderful life she lived.

“Thank you for all the support we’ve had, please continue to do all you can so we can get all our family home with Amelia safely,” Schultes wrote on Facebook.

Provincial police chief Chuon Narin said more than 100 provincial authority personnel, a six-person team of divers, and hundreds of Cambodian and foreign volunteers were part of search operations at the island’s coast and jungle.

Twelve provincial authority motorboats and six from the navy, together with two drones, were also involved in the search efforts, while the National Police sent sniffer dogs to join the operations.

Bambridge was last seen walking alone to her hostel, the Nest Beach Club, which is more than 1km from Police Beach – so-called because of its proximity to a disused police station.

More than 20 people were questioned over her disappearance.

The young woman’s backpack, containing her mobile phone and ATM cards, as well as money, was found on a rock close to the sea.

Chamroeun, the Preah Sihanouk provincial governor, said that while Bambridge’s backpack being placed tidily on a rock close to the sea suggested she had drowned, an autopsy must be carried out to establish the exact cause of death.