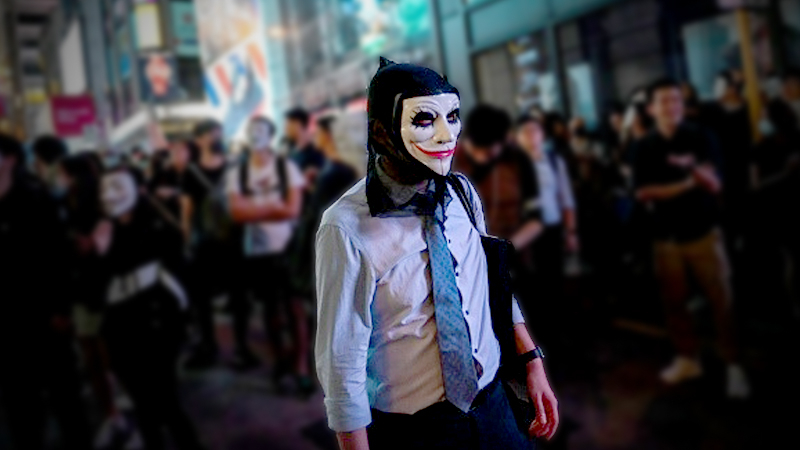 A man wearing a costume marches with other protesters during Halloween celebration on Thursday in Hong Kong. Photo: Getty Images

Hong Kong - Halloween revelry in Hong Kong clashed on Thursday with the reality of protests and emergency restrictions now in place, as police struggled to manage a crowd of demonstrators deliberately intermingled with costumed partygoers in a major nightlife district.

The result was a surreal mix of costumed residents, tourists and expatriates swilling cocktails, chugging beers and dancing in popular party districts in central Hong Kong, while steps away on parallel streets, protesters were hurling insults and chanting “Gangster! Gangster!” at riot police, who pushed them back with tear gas and pepper spray.

In Kowloon, police clashed with a separate group of protesters commemorating those who were injured three months ago when officers stormed a subway station and struck protesters and commuters with batons.

Ahead of the Halloween celebrations, usually boisterous affairs in Hong Kong and a chance for its bars and clubs to cash in on one of the most profitable nights of the year, police warned that a ban on masks and face paint would continue to be enforced.

“Police officers are empowered, if necessary, to ask anyone in a public place to remove their face masks and face coverings, or wipe off their face paint to verify their identity,” Police Superintendent Louis Lau said in a video message posted on Facebook. He warned that police could arrest anyone who resists, emphasising, “Everyone must comply.”

“Police do not rule out the possibility of any violent incident happening,” Lau added.

After violent demonstrations on October 1, the 70th anniversary of the founding of the People’s Republic of China, Hong Kong leader Carrie Lam used emergency powers to enact a ban on face masks at protests. Lam had hoped the ban would quell violence at protests, but it immediately had the opposite effect, further inflaming tensions and intensifying concerns over the erosion of freedoms in Hong Kong.

Pro-democracy lawmakers are challenging the ban in court, with further arguments to be heard on Friday.

Demonstrations have continued every weekend in various districts across the territory, while Lam’s approval ratings have slumped below 20 per cent. The Hong Kong economy has entered a recession, as gross domestic product from the third quarter has shrunk by 3.2 per cent, according to government estimates released on Thursday.

Aware of the potential for confusion and chaos on Halloween, protesters staged an unsanctioned march ending in Lan Kwai Fong in central Hong Kong, one of the most famous party streets in the world.

Bars and entertainment venues there are usually packed on Halloween, with costumed revellers spilling out into the district’s narrow streets, where people drink in the open. It is particularly popular with tourists and expatriates. Protesters previously had avoided the area, sticking to more politically significant locations.

In Lan Kwai Fong, a person in an inflatable green alien costume-danced and posed for pictures in front of a line of about a dozen riot police as the crowd swelled early in the night and police shouted directions in an effort to control the group.

When more marchers arrived to join the crowds in Lan Kwai Fong, police held them back, cordoning off major streets. Onlookers and tourists on crowded sidewalks drank beer as they took in the scene, while traffic was gridlocked behind them. At one point, police arrested a woman in black angel wings and a red dress who screamed for an ambulance.

“I never expected the police to block the road on Halloween,” said a man who identified himself only as Chan and carried his four-year-old on his back. “My daughter was so disappointed and scared.”

Vivian, a woman in her late 20s dressed as a corpse in a black lace dress, said she had come to celebrate Halloween with two colleagues only to encounter a heavy police presence. “It’s absurd and totally unnecessary, she said. “It is one day of the year where we are trying to have fun.... They are the ones causing chaos.”

A 40-year-old woman in a devil costume walked with hundreds of other protesters to demonstrate defiance of the mask ban, chanting, “Five demands, not one less,” referring to protesters’ demands, only one of which has been met.

Others chanted a riff on “Liberate Hong Kong, revolution of our times” -- a popular mantra of protesters -- changing it to “Liberate Lan Kwai Fong, I want to drink.”

Later in the night, dozens of riot police officers pushed down a busy street lined with bars, with patrons seemingly confused over how seriously to take the situation.

A man dressed as Pennywise the clown from the horror novel and film “It” rushed ahead of the police line, urging people to get off the street and indoors. Another man in a police officer costume complete with a bushy mustache snapped selfies with the advancing riot officers as a backdrop.

In anticipation of demonstrations, police closed a number of roads surrounding the area and shuttered three subway stops early. Hong Kong's subway network, run by the MTR Corp, has for weeks enforced the early closure of all stops, citing extensive repair works after protester vandalism. The effect has been a de facto curfew in Hong Kong, most intensely felt right after a wave of spontaneous and violent protests in early October, kicked off by the government's decision to implement the mask ban.

Meanwhile, Ocean Park, one of the oldest amusement parks in Hong Kong, cancelled its annual Halloween Fest, citing concerns over safety and staff.

A large swath of the Lan Kwai Fong area is controlled by businessman Allan Zeman, who helped transform the zone into a party spot beginning in the 1980s. Zeman is a staunch backer of Lam and the government. The businessman, who renounced his Canadian citizenship more than a decade ago, appeared at a pro-police rally this summer and was named as a member of Lam’s delegation to Beijing.

Across Victoria Harbor, protesters gathered to commemorate a more somber event: three months since police stormed a subway station in Prince Edward, beating people indiscriminately and spraying pepper spray into train cars. The event has served to further deepen mistrust of the police force and fuel a backlash against MTR. By 7.30pm, police fired their first rounds of tear gas to clear a crowd blocking the roads and vandalizing subway exits. Later, police used pepper balls and rubber bullets.

Authorities have repeatedly tried to dismiss rumours that people were killed by police inside the station during clashes last summer, but they have failed to convince many pro-democracy protesters, who no longer trust the city’s institutions.

In the months since the incident, the station has become the site of a makeshift vigil. On Thursday, one exit, which has now been sealed by sheet metal, was covered with bouquets of white flowers. People wrote memorial messages and lit incense sticks.