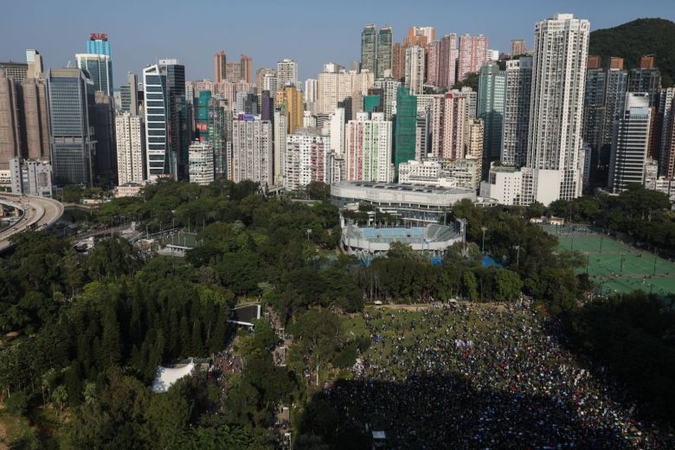 HONG KONG - Police fought street battles on Saturday (Nov 2) with protesters on Hong Kong Island, on the same day that saw three peaceful rallies on both sides of the city’s harbour being cut short and the local bureau of China’s official news agency vandalised.

The clashes between police and protesters took place after thousands of demonstrators showed up at Victoria Park for a rally in spite of a police ban.

Protesters said the rally was an “election gathering” ahead of local polls later this month. Hustings do not require special police approval.

Urging more people to take part in this weekend’s protest, pro-democracy activist Joshua Wong told reporters on Friday: “If more and more people, not only a few thousand, but if more than 100,000 Hong Kongers take to the streets tomorrow, it can let the world know how Hong Kong people fight for a free election.”

Mr Wong was disqualified this week from standing in the upcoming district elections, a move he said was “clearly politically driven”.

Under a clear blue sky and mild weather, the mostly black-clad crowd gathered on Saturday afternoon with banners bearing the faces of district council candidates, while giving out paraphernalia.

Some gave out T-shirts with the words “Free Hong Kong” emblazoned across the front.

But tensions quickly escalated after police massed in the busy Causeway Bay shopping district nearby, searching all those dressed in black.

Warning the protesters that their gathering was illegal and that they were violating a ban on face masks, police fired tear gas to disperse the crowd, which moved westwards to Wan Chai, Central and Sheung Wan. Police also used water cannon to scatter the crowd.

This led the police to cut short a paper crane-folding event and a mass rally in Central, both of which had police approval.

In a statement, police said a number of arrests had been made, with arrest action continuing “as appropriate”.

Across the harbour at Tsim Sha Tsui, an approved outdoor music concert was cut short after tensions escalated among the audience and police charged to disperse protesters who had spilled onto Nathan Road, a main thoroughfare in the area.

Some of the fiercest clashes took place in Wan Chai, where protesters tossed Molotov cocktails at officers, who responded with rapid volleys of tear gas, turning the air thick with choking smoke.

The rioters battered one of the victims in Shantung Street in Mong Kok and stripped his clothes, trousers and even underwear in front of the public.

"Police have zero tolerance against all violence against innocent citizens.  Arrest actions in the areas are underway.  Police warn rioters to stop brutalising citizens," it said in a statement.

A spokesman for Xinhua on Saturday evening issued a statement expressing strong condemnation against the savage behaviours of rioters vandalising and setting fire to its Asia-Pacific Regional Bureau office building in Hong Kong.

Into their 22nd weekend, protests escalated in June over a now-suspended extradition Bill, and have since evolved into an outpouring of anger against local authorities and a call for greater democracy.

The city has been hard-hit by the unrest, with official figures last Thursday showing that Hong Kong is now in technical recession after its economy contracted over two consecutive quarters.