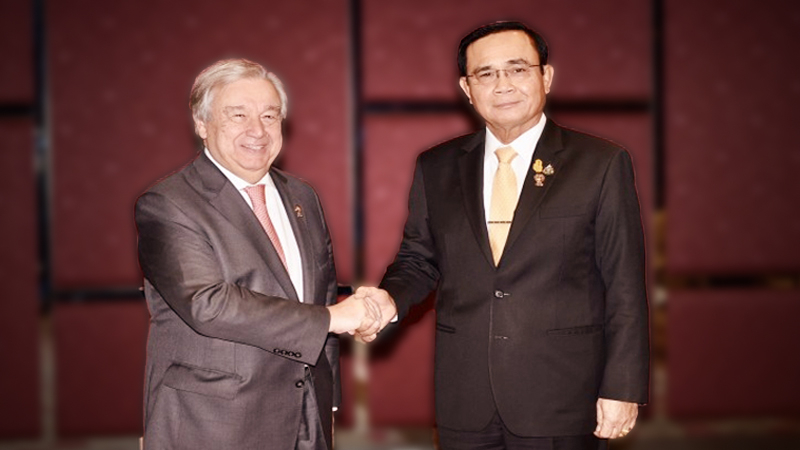 Narumon made the remarks during a briefing on the meeting between Prayut and the UN chief on Saturday afternoon at the 35th Asean Summit and Related Summits at Impact Forum, Muang Thong Thani in Nonthaburi province.

“General Prayut said Asean is ready to cooperate with the United Nations to exchange knowledge, experiences and practices to achieve the Sustainable Development Goals [SDGs],” said Narumon. “Moreover, Thailand will participate in more UN activities in the Asia Pacific, especially in the challenging issues addressed in the 74th session of the UN General Assembly last September.”

In response, the UN chief praised the Thai government for taking an active role at the Asean Summit and missions to achieve the SDG. “Guterres said the UN has made environmental issues its top priority, and asked Thailand to be a pioneer in Southeast Asia for the reduction of greenhouse gas emissions and use of renewable energy. He also admired Thailand’s initiative in hosting a meeting to reduce marine debris,” said Narumon.

Prayut also maintained that Thailand was following UN principles regarding the fixing of illegal unreported and unregulated fishing (IUU), anti-human trafficking, anti-prostitution and human rights promotion. Finally, Thailand will continue to support the work of the UN’s Economic and Social Commission for Asia and the Pacific to celebrate its 75th anniversary in the region.