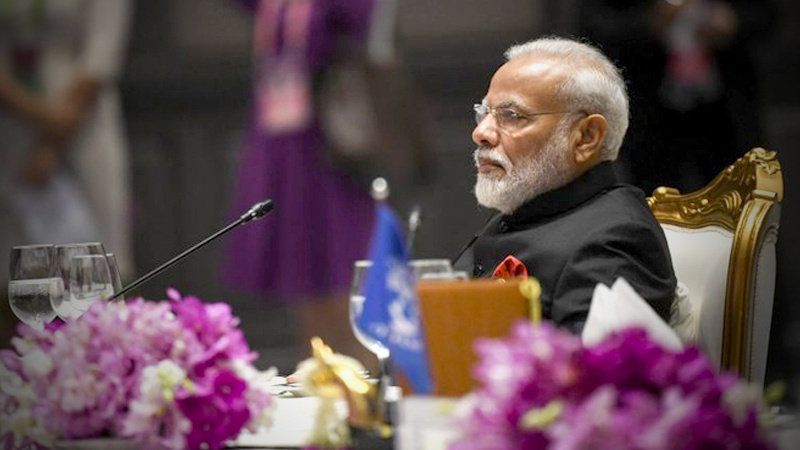 India has chosen not to join the Regional Comprehensive Economic Partnership (RCEP) as the other 15 countries involved in negotiations for the mega trade pact said they are ready to sign the deal next year.

A statement released at the end of the RCEP Summit on Monday (Nov 4) noted that 15 countries “have concluded text-based negotiations for all 20 chapters and essentially all their market access issues; and tasked legal scrubbing by them to commence for signing in 2020”.

It noted that India had “significant outstanding issues, which remain unresolved”.

According to Indian media outlet NDTV, Indian Prime Minister Narendra Modi said during the RCEP Summit on Monday that his “conscience” would not permit him to let India join RCEP.

Ms Vijay Thakur Singh, a senior official from the Indian Ministry of External Affairs, told reporters at a press conference in Bangkok: “India conveyed its decision at the (RCEP) Summit not to join the RCEP agreement. This reflects both our assessment of the current global situation as well as of the fairness and balance of the agreement. India had significant issues of core interest that remained unresolved.”

The decision has been widely welcomed in India, with Congress leader Randeep Singh Surjewala describing it as a “victory for all fighting for protecting national interests”.

“There won’t be any problem for the 15 parties to sign the RCEP next year,” he said.

“But we are also considering the concerns of India, so we are taking an open attitude. Whenever India is ready, it’s welcome to get on board.”

Even without India, RCEP will be the world’s largest trade pact.

Negotiations have been taking place since 2013. This multilateral free trade agreement, if signed, is expected to give a fillip to economic prospects of a region currently battered by the trade war between the United States and China.

New Delhi faces intense domestic opposition to the deal, out of concerns that an influx of cheap Chinese goods would decimate its infant industries.

Ten central trade unions in India had called on the government to withdraw from negotiations.

The Confederation of Indian Industry, meanwhile, called attention to the long-term opportunities of joining RCEP.

Confederation president Vikram Kirloskar, while acknowledging Indian fears about cheap Chinese imports and Mr Modi’s call for a win-win outcome in the RCEP negotiations, said “any decision of joining an agreement of this size and magnitude must not be based on our concerns with regard to just one country”.

Mr Kirloskar said in a statement: “(Free trade agreements) must be considered from their long-term impact, both on our domestic market and the access it provides.

“Some of our industry may be domestically focused today, but in 10 years would want the access to this most vibrant region of 15 other countries that RCEP provides.”

The conclusion of RCEP negotiations and growth of regional value chain facilitated by RCEP will give momentum to integration in the Asia-Pacific, noted the confederation.

“The general perception is that the importance of India is more as a consumer of final product markets.”

“But as RCEP progresses, and favourable tariffs and Rules of Origin (ROOs) kick in, India should become a major hub for coordinating regional value chains through itself – both as a major market for final products and as a location for third-country exports, primarily to the Middle East, Africa and Europe,” Mr Kirloskar said.

Meanwhile, some quarters have raised concerns that India’s exclusion from RCEP will leave the grouping without a “counterweight” to China.

Dr Chen Lurong, an economist at the Jakarta-based Economic Research Institute for Asean and East Asia, told The Straits Times: “The real concern is how to keep China on the ‘right’ track – liberalising trade and investment, keeping market open, playing rule-based games.

“It doesn’t seem to me that a big Chinese economy with open-door policy and respect to the market disciplines will be a threat to the regional or global economy.”

We, the Heads of State/Government of the Member States of the Association of Southeast Asian Nations (ASEAN) and Australia, China, India, Japan, Korea, and New Zealand, gathered on 4 November 2019 in Bangkok, Thailand, on the occasion of the 3rd RCEP Summit.

We recalled our Joint Declaration on the Launch of Negotiations for the RCEP issued in Phnom Penh, Cambodia, in 2012, as well as the Guiding Principles and Objectives for Negotiating the RCEP that we endorsed, in which we committed to achieve a modern, comprehensive, high-quality, and mutually beneficial economic partnership agreement.

Against the backdrop of a fast-changing global environment, the completion of the RCEP negotiations will demonstrate our collective commitment to an open trade and investment environment across the region.

We are negotiating an Agreement intended to further expand and deepen regional value chains for the benefits of our businesses, including small and medium enterprises, as well as our workers, producers, and consumers.

RCEP will significantly boost the region’s future growth prospects and contribute positively to the global economy, while serving as a supporting pillar to a strong multilateral trading system and promoting development in economies across the region.

We welcomed the report presented by Ministers on the outcomes of the RCEP negotiations, which commenced in 2013.

We noted 15 RCEP Participating Countries have concluded text-based negotiations for all 20 chaptersi and essentially all their market access issues; and tasked legal scrubbing by them to commence for signing in 2020.

All RCEP Participating Countries will work together to resolve these outstanding issues in a mutually satisfactory way. India’s final decision will depend on satisfactory resolution of these issues.