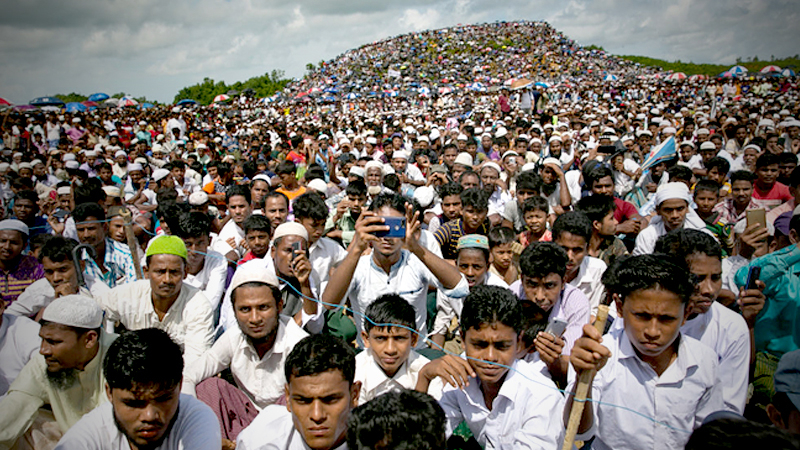 Rohingya refugees use mobile phones during a ceremony organized to remember the second anniversary of the Rohingya crisis on August 25, 2019 in Cox's Bazar, Bangladesh. Photo: GettyImages

Asean leaders have reiterated the need to find a comprehensive and durable solution to the Rohingya crisis by addressing the root causes of the conflict in Rakhine State.

They laid emphasis on the efforts to create a “conducive environment” so that Rohingyas, now sheltered in Bangladesh, could rebuild their lives, according to a 52-point statement issued on the Asean Summit.

The heads of state and government of Asean member countries gathered in Bangkok for the 35th Asean Summit on November 2-3. They encouraged the continued and effective dialogue between Myanmar and Bangladesh to facilitate the repatriation of Rohingyas to their place of origin Rakhine.

They recalled the arrangement on “Return of Displaced Persons from Rakhine State” between Myanmar and Bangladesh, signed in 2017, and looked forward to the voluntary return of displaced persons in a “safe, secure, and dignified” manner.

They encouraged Myanmar to continue to implement the remaining recommendations of the final report of the Advisory Commission on Rakhine State.

“We expect that the Independent Commission of Enquiry, established by the Government of Myanmar, would seek accountability by carrying out an independent and impartial investigation into alleged human rights violations and related issues,” read a statement issued after the Summit.

Myanmar is a member of Asean.

Bangladesh is now hosting over 1.1 million Rohingyas who had fled their homes in Rakhine after being persecuted by their own country.

Myanmar did not take back a single Rohingya from Bangladesh over the last two years, but the country in its attempts to “mislead” the international community claimed that 397 displaced people have voluntarily returned to Myanmar from Bangladesh.

Two repatriation attempts were unsuccessful as Myanmar “failed to remove trust deficit” among the Rohingyas and there was “lack of conducive environment” in Rakhine for their return.

Last week, Bangladesh accused Myanmar of remaining engaged in a “persistent campaign” to mislead the international community to avoid its obligations for “sustained repatriation” and reintegration of the Rohingyas.